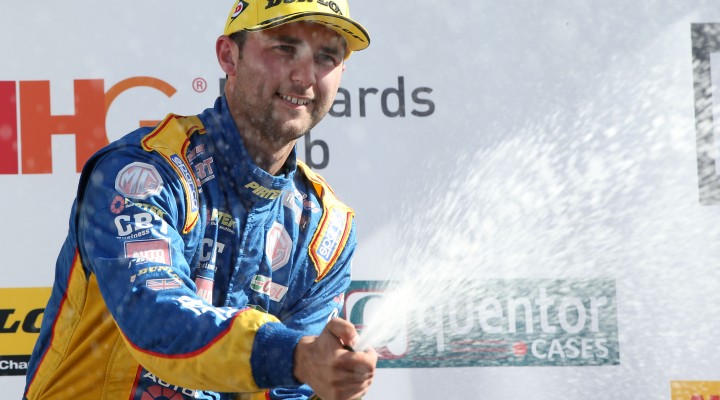 MG Triple Eight Racing celebrated a pair of podium finishes at the ‘Home of British Motorsport’ Silverstone during the penultimate event of the Dunlop MSA British Touring Car Championship, with both Andrew Jordan and Jack Goff taking a podium apiece.

Continuing the MG’s good form on Silverstone’s National Circuit, the Triple Eight-run squad showed flashes of brilliance during Sunday’s three races, with both Jordan and Goff taking popular second places, Jordan in the first race, Goff in the second race. Red Bull athlete Jordan’s fine first race podium was his highlight after a race two puncture ruined the remainder of his weekend, while team-mate Goff’s race two performance was book-ended by two sizeable hits that curtailed his chances of a strong weekend.

The weekend started well for the team on its home circuit, with Jordan securing a second row start with a joint best qualifying result of P4 (58.361) for Sunday’s opening 22-lap encounter. Such was the competition in the session the top-23 were covered by less than a second, and Goff, blocked on his flying lap, finished ninth, albeit just 72 thousandths of a second off his MG team-mate with a 58.433 lap.

Expectations were high in the team with Silverstone having been a happy hunting ground for the Triple Eight-engineered MGs in recent years, and race one looked set to deliver. Both drivers opted for the soft tyre in the opener and from the off it looked like a good decision. Jordan made a strong start to slip down the inside of Sam Tordoff as the field streamed into Becketts and was soon filling the mirrors of Gordon Shedden. Further down the top ten, contact with a rival left Goff on the receiving end of damage and the 24-year-old Snetterton race winner opted to pit – proving to be a smart decision due to it allowing him to have clean air to set a competitive lap time.

Back at the sharp end of the grid, a good run through Copse corner allowed Jordan to replicate his move on Tordoff, this time on Shedden for second. From there on in the quest to close the gap to leader Mat Jackson began, but with the soft tyre performance to contend with the former BTCC champion elected to look after his position. Coming under intense pressure from Shedden, Jordan drove a stunning race in the latter stages to make his MG as wide as possible and ultimately fend him off for a fifth podium of the season. Recovering from his early setback, 5 Star Cases-backed Goff showed his potential by setting the second fastest time of the race. Bad luck however was to strike as a puncture dropped him two laps down.

Free of ballast and on the front row alongside Jackson, Goff made a blistering start to race two but was still outpaced by the BMW of Andy Priaulx. The two tustled hard and Goff looked to capitalise and drew alongside the multiple World Touring Car Champ on the Wellington Straight. Leaving his braking as late as possible, Goff a former Renault UK Clio Cup champion endured a sideways moment on entry to the left-hander, forcing him to back out of the move and subsequently defend from Aron Smith. As the race began to wind into the second half of proceedings a puncture for Jackson at Brooklands promoted Goff to second where he finished at the flag for a third podium finish of the season

Jordan pushed hard throughout race two and remained fifth in the opening laps, before being promoted to fourth when Jackson dropped down the order, despite the looming threat of Shedden in his mirrors. All was seemingly going to plan until another puncture blighted the team, this time at Becketts, two corners from the flag, where the Pirtek-backed ace nursed home the MG to 19th as the flag dropped.

As usual, race three was an intense, frenetic encounter, and the 1.64-mile circuit threw up no end of door-to-door battles. Jordan advanced quickly, moving from 19th to 12th on the opening tour. Goff, who started ninth, held position in the opening stages before once again receiving sizeable contact, this time from Priaulx’s BMW at Luffield. The result was damaged front right wheel damage, but a sublime job by the Triple Eight mechanics saw Goff return to the race, albeit six laps down.

Try as he might, Jordan couldn’t overcome the tustling two-some of Aiden Moffat and Tom Ingram who were embroiled in a battle for tenth. Using the best of his experience and guile, Jordan ultimately settled for twelfth, while his MG team-mate crossed the line last, albeit not classified due to the laps lost in the earlier contact.

Following the Silverstone weekend, a number of contenders have dropped out of the title challenge, but Jordan still has a mathematical chance of the drivers’ title, while the team will put all effort into defending its Manufacturer/Constructor crown from Honda, who are currently 64 points ahead. MG Triple Eight Racing now has a short two week turnaround before the squad visits Kent track, Brands Hatch, which once again plays host to the Dunlop MSA British Touring Car Championship season finale on 10-11 October.

Andrew Jordan said: “It was a weekend of what could have been; the puncture in race two ruined it for us. I had made it my target this weekend to finish the season third in the points but I really don’t think that will be possible now. I’ve been happy with the MG, that is the most I could have achieved and I feel we made another step forward from Rockingham. Two more corners in race two and it would have been a completely different weekend. It was nice to get back on the podium in the first race; it was all about taking advantage of the soft tyres in the early laps and the moves on Sam and Gordon were pretty well thought out. Race three was one of those races where we made progress and then suddenly hit a wall of traffic. We go away from here with some positives, but it could have been better.”

Jack Goff said: “This weekend has been the story of our season really – we’ve had great pace but not much luck. I had a BMW block me in qualifying which saw us not set the lap we wanted and then a problem in race one left us at the back. We knew after that it was all about setting a quick lap time and luckily we pulled it together which saved race two. The car felt great and I think we could have gone on to catch Priaulx but we lost a wheel weight which then made me think we had another puncture. The less said about race three the better really. I left plenty of room on the inside for him and he still hit me. It’s nice to go home with silverware but we could have had a few more pots today.”