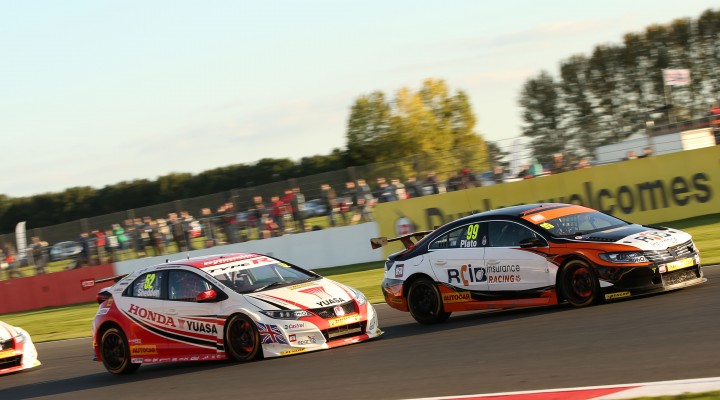 Five previous champions head to Brands Hatch in Kent next weekend (10/11 October) looking to add to their tally of titles at the finale of the 2015 Dunlop MSA British Touring Car Championship.

It’s certain to be a thrilling grandstand finish as the UK’s top drivers battle it out on the world famous Grand Prix circuit, and tens of thousands of fans are set to see all the action unfold first hand.

There have already been ten different drivers on the top step of the BTCC podium this year, and after nine race meetings spanning the length and breadth of the country, the championship once again has come right down to the wire and could be decided in race 30 of 30.

Such is the closeness and competitiveness of the 2015 campaign that five drivers in three different models of car could still take top honours, with manufacturer efforts from Honda and MG battling it out with top independent outfit Team BMR RCIB Insurance.

While the outcome of the three-race showdown is impossible to predict, the only certainty is that there will be heartache and heroics aplenty before the 2015 champion raises the iconic BTCC trophy.

The thousands of trackside fans will be joined by millions more watching every unmissable moment live and in high definition on ITV4 from 10:15 on Sunday 11 October. There will be over eight hours of coverage that will culminate in the final champion’s podium on the famous Brands Hatch asphalt.

Story so far: Shedden in the hot hatch seat
67 points are on offer across the final three contests, giving five drivers a mathematical chance of leaving Brands Hatch with the most coveted trophy in UK motor sport – all of them having done so at least once before.

With 27 BTCC races already completed, Honda Yuasa Racing’s Gordon Shedden has the target on his back. He leads the way at the top of the standings by 23 points following a remarkable first showing from the all-new Honda Civic Type R. The hot hatch is being chased every inch of the way by the Team BMR RCIB Insurance VW of Jason Plato – a contrasting car in almost every respect.

Reigning champion Colin Turkington trails his team-mate Plato by just nine points, while triple BTCC champ Matt Neal lies fourth for Honda with the MG of Andrew Jordan rounding out the top five. There are an incredible nine titles between them, making this undoubtedly one of the most top quality and experienced battles for supremacy in the series’ illustrious history.

Last time out at Silverstone saw Shedden extend his advantage as Plato suffered a puncture in race one that dropped him out of the points, but just over a month earlier it was the Scotsman in strife with a DNF at Snetterton. With such fine margins, a single error or bit of bad luck at Brands Hatch could end the championship hopes for any of the contenders.

Colin Turkington has played the stealth game in recent events, picking up wins and podiums where possible but banking solid points when he didn’t have the outright pace. A superb drive in race three at Silverstone put him within striking distance of Plato and Shedden, and as he returns to the scene of his 2014 championship victory the Ulsterman is hell-bent on putting his name to the BTCC trophy for a third time.

Matt Neal and Andrew Jordan have an outside chance at scoring a fourth and second title respectively, but neither will be giving up until the final chequered flag of the year falls.

The momentum is, however, with Shedden, who will be doing everything in his power to keep Plato and his other rivals behind him. “Silverstone was a pleasant surprise,” said the 2012 champion. “We’ve done our homework with this car and it meant we could get three clean races and a really big haul of points. We’ve got a great opportunity going to Brands Hatch.”

“It’s never enough of a points buffer though! It all turns around so quickly in the BTCC – non-finishes, punctures, contact, anything like that can happen, so we’ve got three extremely tough races to come.”

Talking point: Four championships up for grabs
It’s not just the overall Drivers’ championship that will be decided on the last race day of the weekend. While Jason Plato and Colin Turkington are going for all-out glory, both will have one eye on the Independents’ trophy as Turkington tops that table from Plato by just 26 points.

The WIX Racing Mercedes A-Class of Adam Morgan is also in touch, he’s 46 points behind, but could still overhaul the Volkswagens should they have dramas on race day.

The Teams’ championship also remains up for grabs, with Team BMR RCIB Insurance leading the way in its breakthrough BTCC season. The Buntingford-based squad has a strong buffer to nearest rival Honda Yuasa Racing, which is itself fighting hard to take back the Manufacturers’ title from reigning champions MG Triple Eight Racing.

With so much still to play for, it’s sure to be an all-out action-packed day for drivers and fans alike.

Local heroes: Motorbase on the march
One team that has been tearing up the tarmac in the second half of the season has been Motorbase Performance. The Wrotham-based outfit has its factory just a few minutes from the Brands Hatch front gates, and its main man Mat Jackson has scored two pole positions and two wins already.

Whilst admitting that it’s not ‘his show to spoil’, expect to see the ballast-free Ford Focus near the front once again, adding another factor for the championship contenders to consider.

It was also a breakthrough weekend for Jackson’s team-mate James Cole at Silverstone. The young-gun broke into the top ten for the first time in his BTCC career and grabbed plenty of attention as he was right in the thick of the action all afternoon.

Timetable and tickets
Three headlining BTCC races will take place on Sunday, with the entire race day being broadcast live and in high definition on ITV4 from 10:15 to 18:30.

It’s not just the awesome 30-car BTCC field that draws the huge crowds to Brands Hatch, though. An amazing array of supporting series will also be in action, with all except the Porsche Carrera Cup GB set to crown their champions at the finale with Dan Cammish having already taken the Porsche crown last time out at Silverstone.

There will be races from MSA Formula and Renault UK Clio Cup, with GT action from the Ginetta Junior Championship and Ginetta GT4 Supercup.