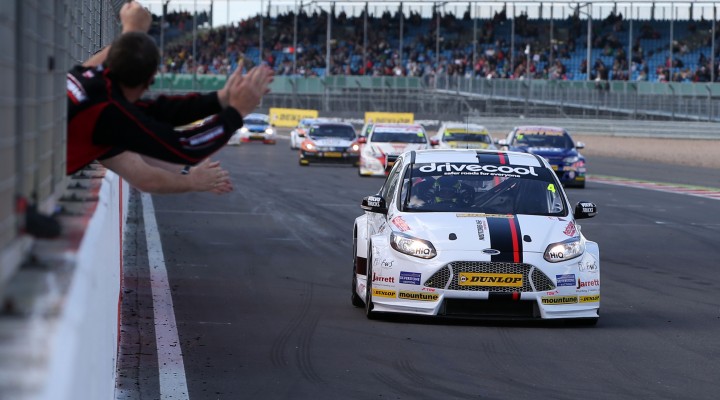 Motorbase Performance will be hunting more wins at the final round of the 2015 Dunlop MSA British Touring Car Championship this weekend (10/11 October). The squad is based just up the road from Brands Hatch in Wrotham, and is hoping home advantage plays a part in the weekend’s proceedings as it gears up for the season closer in front of a partisan crowd on the iconic GP circuit.

Motorbase celebrated its second outright win of the season during a record-breaking weekend at Silverstone just two weeks ago that also saw the outfit secure pole position in all three encounters for the first time since its maiden BTCC appearance in 2006.

Despite missing the first half of the season, the squad’s has scored two outright race wins, five independent race wins and four podiums from the last three rounds. Motorbase has scored points in every round contested and the team is as determined as ever to keep that record in tact as the last flag drops.

“Going into the last race of the year already feels far too early,” commented Motorbase Team Manager Oly Collins. “We’ve had a great second half of 2015; one which makes us all wish we had been in it from the start. We’re all extremely proud of what we’ve managed to achieve in such a short period of time and we’re ready more than ever to launch a full championship challenging campaign for 2016.”

Mat Jackson adds, “It feels like we’ve only just got going really and here we are already at the end. We’ve had such mega results since we returned to the grid that you can’t help but wonder ‘what if’ but all of the hard work that’s gone into this season just pushes us further forward for next year’s campaign.

“Brands should be another good circuit for the Focus. With the chassis improvements that have been made to the car this season I’d expect us to be right up there in qualifying again and we want to go out with a bang. We’re not there to interfere with anyone’s title but at the same time we’re not going to roll over. We’ll still be pushing for more wins. It should be a great final weekend.”

James Cole enjoyed his best weekend to date at Silverstone, scoring two top tens and lining up on pole for the reversed grid contest. Ahead of the final event he said, “It’s hard to believe that we’re already at the last race weekend of the season, especially as I’m just starting to get to grips with the car and the results are starting to go my way. I’m really looking forward to the weekend though, with Brands Hatch being local to Motorbase it’ll be great to have the fans support and the GP loop should suit the Focus well.

“We had a great set of results from Silverstone and I still feel that there’s more to come. Hopefully we can carry on the good work with another ‘best-ever’ set of results at Brands and end the season on a high!”

You can watch all of the action live and in high definition on ITV4 from 10:15 on Sunday and online at itv.com/btcc (UK only). Keep up to date with all the BTCC news on our Facebook and Twitter pages.