Highs and lows for Morgan’s Mercedes in FP1 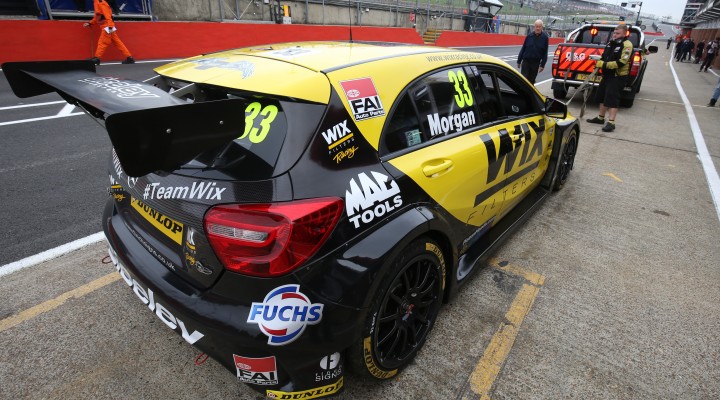 It wasn’t all plain sailing for the WIX Racing driver, however, as his session ended prematurely due to his Mercedes A-Class suffering with an electrical glitch in the closing minutes. The Lancashire star’s car was eventually brought back to the pitlane by a tow truck, but Morgan remained in an upbeat mood.

“It was a good run,” said Morgan. “I think we just had a bit of an electrical problem but the guys will get that sorted. The car felt good and to go out there and prove our pace is great, particularly on such a fantastic circuit. Despite the little issue it’s a great start to the weekend and hopefully we’ve got our bad luck out of the way!”

Other drivers faced greater challenges than Morgan with series returnee Jake Hill nerfing the barrier on the exit of Grahim Hill Bend in his Audi S3, whilst almost simultaneously Simon Belcher’s Toyota was spinning off in sector three.

A lengthy mid-session stoppage followed to retrieve both stricken cars with Belcher admitting, “I closed in on Rob Austin too quickly going through Dingle Dell and then locked up on the exit to avoid him.”

Alain Menu cut a frustrated figure in the pitlane throughout the duration as his VW CC endured power steering issues.

The pace at the front was quite impressive, albeit in perfect conditions, as championship contender Jason Plato ended the session in second ahead of recent race-winner Mat Jackson. Colin Turkington proved the pace in Team BMR RCIB Insurance’s machinery with fourth, whilst Jack Goff and Andy Priaulx were fifth and sixth respectively – making it five different marques in the top six.

Former champions and fellow contenders Matt Neal and Andrew Jordan were next up in the timesheets, ahead of Aron Smith. Championship leader Gordon Shedden finished the session in tenth for Honda Yuasa Racing.

Click here to view the full classification from FP1.