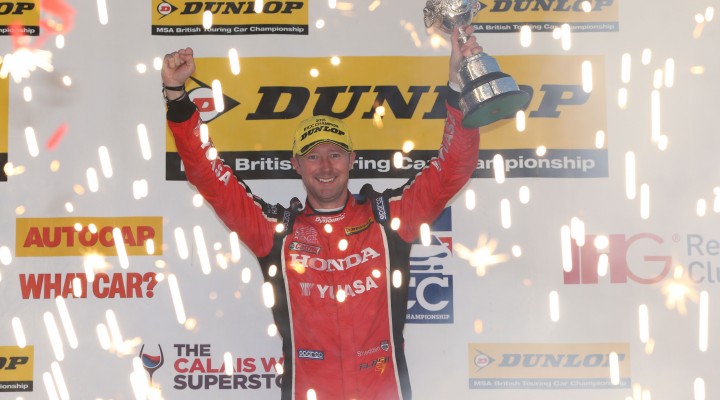 Honda Yuasa Racing’s Gordon Shedden has been crowned the 2015 Dunlop MSA British Touring Car Champion after producing a sensational drive in the final race of a dramatic season.

It was a contest that saw title rival Jason Plato surge into a commanding lead after Matt Neal’s Honda slid wide at Paddock Hill Bend on the opening tour, which meant Shedden had to finish in at least sixth position to claim the championship trophy.

The odds seemed stacked against the Scotsman, who started the race down in a lowly 19th place, but the Honda Civic Type R driver went on a relentless attack that would prove fruitful after 18 laps of nerve-racking action played out in front of a record 42,000 crowd.

Three safety car periods curtailed Plato’s getaway in the early stages, and also gave Shedden the chance to close in on his next target. Plato’s Team BMR RCIB Insurance team-mate Alain Menu did everything he could to hold up Gordon’s charge as the pair touched on a number of occasions. A puncture for Menu’s VW unleashed the Fife-based racer, who then made move after startling move in what was undoubtedly one of the drives of his career.

He dismissed Sam Tordoff’s BMW with consummate ease to make it into the top ten, before carving his way by Andrew Jordan’s MG and Andy Priaulx’s BMW on lap ten.

Next up was Aron Smith’s VW with the Irishman looking to assist stablemate Plato. Shedden lined him up as the duo approached Clearways on lap 12 and when the VW ran slightly wide on the exit of the corner the Honda slipped down the inside. They ran side-by-side across the line with the roar from the crowd almost as deafening as the 30 flame-spitting BTCC machines performing in front of them. Shedden was through and now just needed one more place to clinch the most coveted prize in British motor sport.

That move came one tour later as Rob Collard’s BMW proved defenceless against Shedden’s ballast-free Honda, and he took another place in the shape of Adam Morgan’s WIX Racing Mercedes on the run up to Druids. An uncertain Shedden remained on the attack, however, and became embroiled in a further dispute for position with Jack Goff’s MG. Matt Neal eased his team-mate’s concern by slipping back to hand him fourth place and on the final lap Shedden eventually settled on his position.

Plato’s flawless display deserved victory as he crossed the line ahead of Mat Jackson’s Ford Focus and MG Triple Eight Racing’s Goff. While his 94th BTCC triumph extended his incredible victory record, it was unable to bring him his third title, but few could argue with Shedden’s performance in this race and throughout this unforgettable season.

The Honda Yuasa Racing crew lined the pitwall and the crowd rose to its feet as Shedden blasted across the line, seemingly in joyful tears, and the new 2015 BTCC champion was crowned.

The day had begun with a dominant double for Motorbase Performance’s Mat Jackson as the Ford Focus proved the weapon of choice around the Brands Hatch Grand Prix circuit. The local team has enjoyed a stunning comeback to the BTCC having only entered at the midway stage of the season, as Jackson claimed four wins in the final two events.

Morgan took two third place finishes in the opening two bouts, while Team BMR RCIB Insurance’s Aron Smith and Speedworks’ Tom Ingram stood on the second step of the podium in races one and two respectively.

With the dust settling over another incredible tin-top season it was Shedden celebrating under the floodlights as he won the Drivers’ championship by just four points from Plato, with Neal beating Turkington to third in the standings. There was some joy for outgoing champion Turkington, however, as he claimed the Independent Drivers’ championship, whilst Team BMR RCIB Insurance took Teams’ and Independents’ Team honours.

There was double delight for Honda Yuasa Racing as it wrestled back the Manufacturers’ title from MG. Josh Cook’s first season in the BTCC with Power Maxed Racing proved a fantastic success as he won the Jack Sears Trophy for rookie drivers.

The 2016 campaign will blast into action at the Season Launch on 22 March before the season gets underway back at Brands Hatch in early April.

Gordon Shedden said: “I can’t believe it – I just can’t believe it! What an incredible day, what an incredible race! That’s touring car racing at its absolute best. To win it from that far back, I can’t believe it. It seemed like an impossible task but the Civic Type R was absolutely on fire with no ballast, I was just so desperate to win – wow! I’m almost lost for words, but the emotion is unbelievable. Sometimes the best way to keep it on the track is to keep pushing! To win it in the debut year of the Civic Type R and to get the manufacturers’ too is out of this world. It’s even more special than the first time.”

Jason Plato said: “It was close but no cigar. It’s been a great year for us, but we’ve been dogged with some bad luck to he honest. Had it not been for that we’d have won it, but that’s the way it goes. I understand defeat as well as victory, and the balls just didn’t roll our way. I’m pleased with our performance this weekend, and I’m pleased with my engineers – we’ve managed to make it a potentially championship-winning car. I’m signed for another two years with Team BMR and we have quite a few things in the pipeline – you’ll have to wait and see but there’s some exciting stuff.”

Matt Neal said: “It all worked out in the end didn’t it! It was a bit fraught for a while, but it’s just been a fantastic debut year for the Honda Civic Type R. Jason [Plato] got his skates on and we had a royal scrap behind him – no-one was rolling over and it was a good race. I’m so pleased for Flash and the team. We’ve got three nice big trophies to take back to the factory – the Drivers’, Manufacturers’ and third in Drivers’ – those are pretty special to take away.”

Colin Turkington said: “It’s the fifth time I’ve picked up the Independents’ trophy and it means a lot to me. Obviously you’re always gunning for the main prize, and I did my very best to defend my title this year. My back was against the wall but I can be proud I gave it 100 per cent effort; it’s all you can ask. For sure it’s been a great season for Team BMR – we’ve come away with a lot of trophies, and Jason [Plato] came very close to winning the title, so in year one it was a really top effort, we can all be proud. It always goes to the wire – nobody gets this championship easily, that’s why we all love it.”

Josh Cook said: “It’s been a really good season – to bring home the Jack Sears Trophy has been a target for us, and even though we wrapped it up with an overall podium at Rockingham it means so much to finally receive the trophy from the man himself! The first year in any championship is always a learning year and I’m with a new team too, so it was very much all of us learning together. For me and Dave [Newsham] to be so far towards the front is a real credit to what everyone has managed to do, and hopefully we’ll be back on the grid next year and build on what we’ve achieved.”

Alan Gow, BTCC Series Director, said: “What more could you ask for? It just goes to show that in the BTCC, it’s never over until it’s over. You come into the final race weekend and a lot of people were saying Gordon [Shedden] would just cruise around and get the title, but look what happened! In the end it came down to just one race for the championship, but the way that everything unfolded couldn’t have gone better. No-one disputes that he’s an incredibly deserving champion. He’s driven superbly all year and in that last race – wow – the pressure he was under, he could have so easily slipped up, but he made it. Everyone in this pit lane is a winner; they have all done an incredible job this season. The fans came out in their droves this year and it was a record crowd that we had here at Brands Hatch today.”

Click here to view the full classification from the final event of the season.