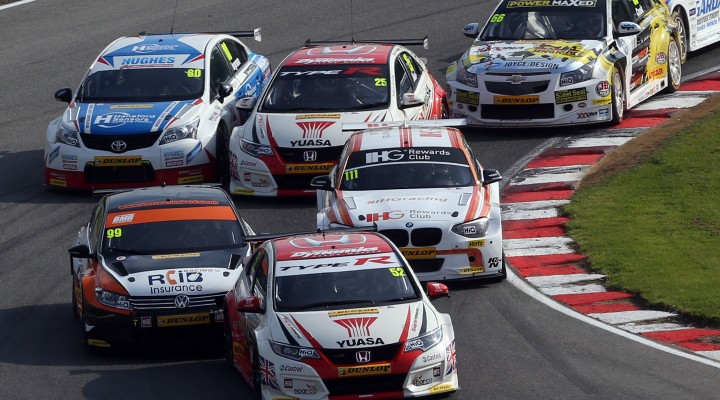 The 2015 Dunlop MSA British Touring Car Championship will come down to the final race of the season later this afternoon after Jason Plato cut into Gordon Shedden’s previously healthy points advantage during a tense second encounter at Brands Hatch.

Matt Neal and Colin Turkington joined Andrew Jordan in slipping out of title contention, despite mixed fortunes for the trio in race two, so a duel between Plato and Shedden in the 30th contest of this incredible 30 race campaign will decide the destiny of the most coveted prize in British motor sport.

To add to one of the most dramatic ever finishes to a BTCC season it will be Matt Neal starting the final race from pole position, alongside Plato, while Shedden will be way down in 19th. The Scotsman still holds a 12 point lead in the Drivers’ standings but Plato will have a race win and a potential 22 points in his sights!

“I am really pleased with that,” said Plato. “We’ve had a pretty good day so far. Matt [Neal] and I have a great history and I guess we’re assured of some more action. Game on!”

The race itself saw Mat Jackson claiming his second victory of the day although he was made to work a lot harder this time around by the young chargers of Adam Morgan and Tom Ingram. Jackson’s ballast-laden Ford Focus was clearly not as dominant against his lighter rivals, but he was able to keep them at bay as they squabbled for second.

“I could see Adam [Morgan] and Tom [Ingram] tripping over themselves,” said Jackson. “This Motorbase Ford is just phenomenal around the Brands Hatch Grand Prix circuit. We’ll try and make it three out of three later on.”

Ingram’s Toyota eventually won the battle with Morgan’s Mercedes after the Speedworks driver pulled off a stellar pass through Sheene on lap 14. A similar battle ensued behind them for fourth place and an equally fantastic move clinched it as Dave Newsham’s Chevrolet scythed down the inside of MG Triple Eight’s  Jack Goff at Paddock Hill Bend.

Plato was next up in the finishing order having fought his way up from eighth on the grid. One of those places was eventually relinquished by Aron Smith who moved over to let his Team BMR RCIB Insurance team-mate through.

Neal’s Honda relegated Smith down a further place to eighth, which represented the final act of several fantastic moves from the Civic Type R man. The BMWs of Andy Priaulx and Rob Collard rounded out the top ten having also both been passed by the charging Neal.

Make sure you tune into ITV4 for race three at 17:05, which will see Britain’s premier motor sport series go down to the wire!