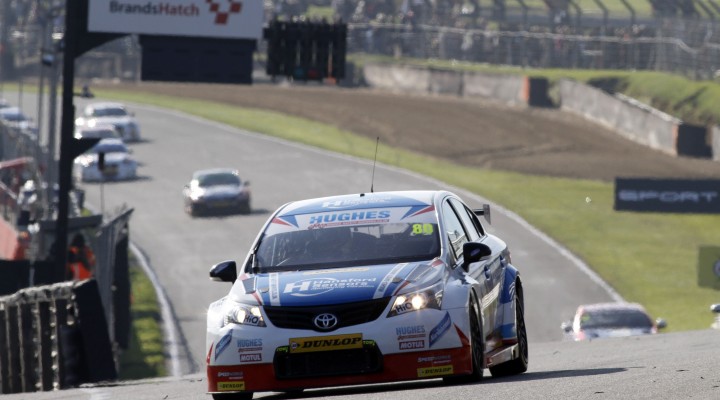 After Speedworks Motorsport’s customary pre-event shakedown was rained off, Ingram was on the back foot in practice but dug deep in qualifying to place his Toyota Avensis seventh on the starting grid amongst the 30 high-calibre contenders. Just over a third of a second shy of the outright benchmark in what is by common consent the world’s most fiercely-disputed tin-top series, for added pressure, he also found himself sandwiched right in-between the four title protagonists.

On the softer-compound tyres, the young Bucks ace made the strategic decision to sacrifice the opening encounter in favour of maximising his chances for the remainder of the day. It proved to be a masterstroke as after pitting under an early safety car period, he returned to the track in clean air and punched in a lap time good enough to secure fifth on the grid for race two – when he would be running on the more durable standard compound Dunlop rubber.

In front of a record 42,000-strong crowd, a feisty start in the second of the day’s ITV4 live-televised contests allowed Ingram to snatch fourth place from Dave Newsham through Paddock Hill Bend and third from Árón Smith at Druids. After edging away, Ingram was lighting up the timing screens and primed to pounce on Adam Morgan ahead when the safety car reappeared due to incidents lower down the order, halting his progress.

At the restart, Ingram again clung onto the coat-tails of Morgan and Mat Jackson as the leading trio once more pulled clear, blanketed by barely three quarters of a second. After overhauling Morgan’s Mercedes on lap 14, he immediately halved the deficit to Jackson’s Ford, and although time ultimately conspired against him, he was nonetheless delighted to have replicated his breakthrough Rockingham result from a month earlier with a second runner-up finish of his fledgling touring car career.

From sixth on the reversed grid, the British Racing Drivers’ Club (BRDC) SuperStar looked like a solid bet for another rostrum in the finale, particularly after an excellent start saw him attacking for fourth heading into Druids for the first time. Unfortunately, contact sent him spinning.

After winding up 13th in the overall standings and fifth in the Independents’ Trophy – a six-place improvement on 2014 – the three-time Ginetta Champion and former British Karting Champion was able to reflect upon a job well done.

“We were certainly looking forward to Brands Hatch a lot more than Silverstone, because we knew its layout and characteristics would play far more into our hands,” acknowledged Ingram, at just 22, the third-youngest competitor in the field. “You need a good chassis underneath you at Brands GP, and the Toyota really scores in that department. It’s a superb track – a challenging, demanding and enjoyable drivers’ circuit – and having achieved our best result of the season there last year, we had another podium in our sights.

“Obviously there was a championship battle going on and I was mindful of not wanting to interfere or adversely affect the outcome in any way – so then of course we go and qualify right in the middle of the four title contenders! We were pleasantly surprised to line up seventh after having no shakedown, but in race one, we knew being realistic that in the cooler morning temperatures, the soft tyres were always going to drop off and we would likely struggle to get a decent result, so we decided to play a tactical game.

“That paid off with fifth on the grid for the second race and I got a fantastic start to gain two places in as many corners, after which we were firmly in the fight for the lead throughout. We pulled away from the guys behind – which proved we had some really good pace – and I actually felt like I had the quickest car of the three of us at the front.

“It was tricky to find a way past Adam, because the only real place I had a discernible edge over him was on the exit of Surtees, which meant I needed to put him out-of-position there. That eventually worked and I got him on the run towards Dingle Dell, after which I caught Mat. He made a couple of mistakes on the last lap, so he was clearly pushing hard to stay ahead.

“Without the early safety car, I think we would have had a genuine chance to win because that enabled them to preserve their soft tyres, but still, we were over-the-moon to finish second and it fulfilled our objective.

“To have come away with two podiums from the last three meetings of 2015 is awesome – it marks a significant step forward and validates all the development and hard work put in by the Speedworks boys. It’s been a mega effort, and I’m merely the one that steers and presses the pedals. For a small, single-car independent team with a budget that’s dwarfed by most of our rivals, I think we’ve done a phenomenal job this year and can be immensely proud. I really can’t praise them all enough.”