Moffat returns with Laser Tools Racing and Ciceley Motorsport for 2016 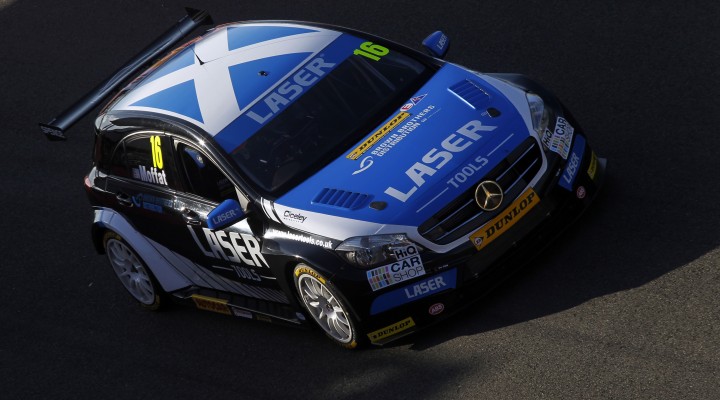 Aiden Moffat and Laser Tools Racing have announced that they will again team up with Ciceley Motorsport for the Dunlop MSA British Touring Car Championship in 2016.

The 2015 partnership yielded considerable success, the highlight being both Ciceley-prepared Mercedes-Benz A-Class drivers Moffat and Adam Morgan starting on the front row of the grid at Knockhill with both drivers finishing on the podium. Aiden also secured his first Independent win at Donington Park and is now a serious contender. This continued joint venture hopes to put young guns Moffat and Morgan in the championship hunt when the 2016 season kicks off in April.

Aiden said: “I’m really happy to be staying in the Mercedes-Benz A-Class and, with the continued support of Laser Tools, I’m really looking forward to the 2016 season. This year has been a really good season for us and this inspires further confidence throughout the entire team. I was 19 last month and my sponsor, my team and my car have helped me to mature both as a person and a racing driver over the last 12 months. We have our aims for 2016 and continuing to have the car prepared by Ciceley Motorsport gives us the perfect platform to achieve our target.”

Laser Tools Racing Team Principal, Bob Moffat commented: “We have achieved everything we set out to do in 2015; Aiden felt immediately comfortable and confident in the capabilities of the Mercedes right from the start of the season. Our aim was to get top-ten finishes with at least one top-five, so to achieve that together with an independent win and a podium for Aiden at Knockhill, it has definitely been a successful year.”

Russell Morgan, Ciceley Motorsport Team Owner, said: “This is very good news for both teams. Nobody has been surprised by Aiden’s pace this year. We immediately witnessed his potential and his natural talent during his very first test in the Mercedes-Benz A-Class at Donington Park, when Aiden lapped the track within the same couple of tenths all day long. All Aiden needed was seat time which in turn has honed his racecraft. This year he has kept Adam honest, and will continue to do so in 2016 as they push each other which in turn is helping us to develop the cars. WIX Filters have also recently extended their title sponsorship agreement with our team, meaning the Ciceley Mercedes team can only benefit further from our continued association.”