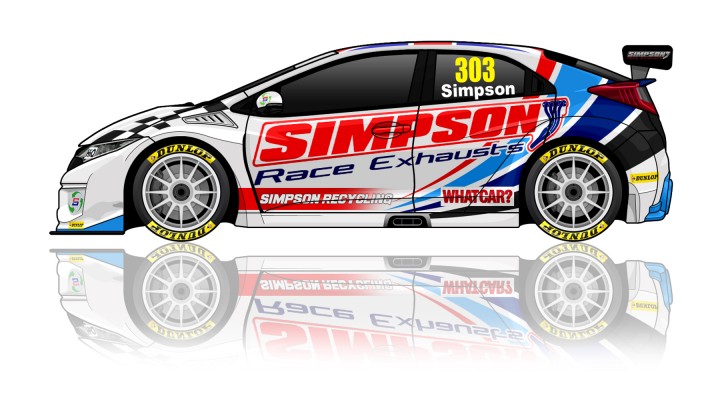 Simpson is a two-time European Hot Rod Champion, a former runner-up on the World Championship stage and more recently a double Quaife Intermarque title-winner. The 34-year-old recently tested a Civic Type R at Donington Park, and despite enjoying the experience enormously he is under no illusions as to the huge challenge ahead.

“BTCC cars are heavier and more powerful than what I’ve been accustomed to,” acknowledged the West Drayton ace, who will also be eligible for the Jack Sears Trophy for newcomers. “I also have to get used to dealing with front-wheel-drive so I know it will be a steep learning curve in the first year, but the BTCC is the next step and the pinnacle of saloon car racing.

“Obviously my aim is to be BTCC Champion one day, although that won’t happen overnight, and for the time being I’m just looking forward to settling into the series and getting to grips with the famously cut-and-thrust nature of touring car racing. If we can consistently improve and edge closer to the front of the grid as the season progresses, hopefully by the end of it we can be scoring some strong finishes.”

Simpson’s Honda will initially run under the Simpson Race Exhausts banner alongside Speedworks’ Toyota Avensis, whose driver will be confirmed in due course.

This year witnessed a genuine breakthrough for Speedworks, as in its fifth season in the all-action, ITV4 live-televised BTCC, the plucky independent squad achieved its maiden podium finish when Tom Ingram piloted its heavily-revised machine to runner-up spoils at Rockingham, following a captivating duel for victory with two-time champion Jason Plato.

The British Racing Drivers’ Club (BRDC) SuperStar enjoyed the experience so much that he replicated the result in the Brands Hatch finale a month later. Buoyed by its tremendously popular success, Speedworks is doubling up in 2016 after acquiring a second TBL (TOCA BTCC Licence) and adding a Team Dynamics-supplied Civic Type R to its stable – meaning Simpson will be behind the wheel of the same model of car as that which propelled Honda Yuasa Racing’s Gordon Shedden to the title this season.

“We are absolutely delighted to be expanding our presence on the BTCC grid, which will make Speedworks a more potent force than ever before,” contended the Northwich, Cheshire-based outfit’s team principal Christian Dick. “I am extremely pleased that Matt and his family are coming on-board with us, as we have known them for a while now and have been watching Matt’s progress with great interest. We’re sure that we can get the best out of him and deliver a solid package.

“Due in no small part to Team Dynamics being the most successful BTCC team in the paddock, we have entered into an agreement with them to produce for us a new NGTC Honda Civic Type R, with components used in 2015 and to the same specification as their championship-winning car. This agreement also extends to downstream technical support, and we are looking forward to working with them over the coming years and forging a strong partnership.”

Keep in touch with Matt and the team via the following social media feeds: