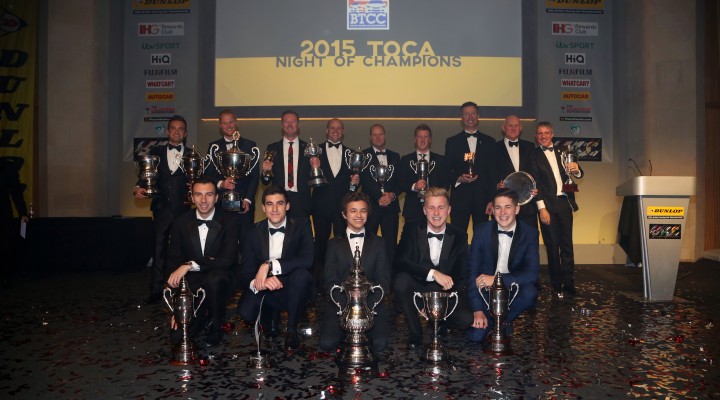 The annual TOCA Night of Champions brought the curtain down on an unforgettable season in the Dunlop MSA British Touring Car Championship last weekend (28 November).

The paddock assembled for the final time at the superb Crowne Plaza Heythrop Park hotel to celebrate all the 2015 BTCC trophy winners as well as champions from the support series, with each taking to the stage to receive their silverware from the inimitable ITV Sport duo of Steve Rider and Louise Goodman.

After a thrilling year in every class on the TOCA package all were well deserving of their rewards, as Ashley Sutton claimed the Renault UK Clio Cup, Jamie Caroline and Tom Oliphant were Ginetta champions in the Junior and GT4 SuperCup respectively while Dan Cammish picked up the Porsche Carrera Cup GB honours and Lando Norris became the first MSA Formula champion.

It was then the turn of the BTCC success stories to claim their prizes, as first Josh Cook joined the inaugural BTCC champion Jack Sears on stage to receive the impressive Jack Sears Trophy as top rookie. Adam Morgan, Jason Plato and Colin Turkington were next up to get their Independent prizes before the overall championship top three received their plaudits. Matt Neal and Plato took third and second before the coveted main accolade was presented.

Of course the biggest celebrations were reserved for this year’s BTCC champion – Gordon Shedden – and his victorious Honda squad that picked up manufacturer honours.

As the confetti settled, there was one more surprise in store for the assembled guests, as Series Director Alan Gow took to the stage to announce an incredible extension to Dunlop’s title sponsorship of the BTCC which now stretches to 2022. Click here to read the full story.