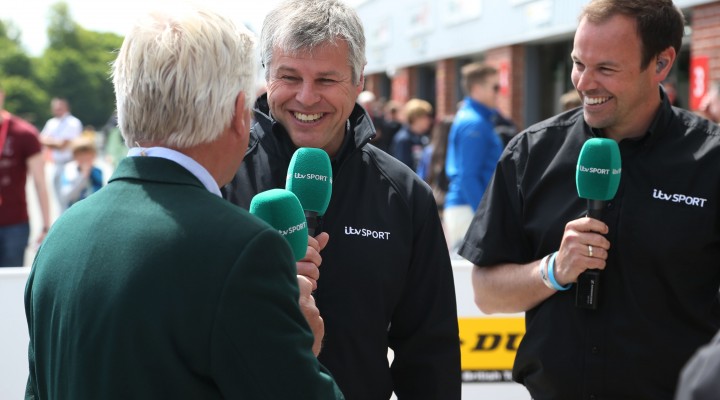 The Dunlop MSA British Touring Car Championship will be screened live and exclusively on the ITV network until 2022 after a contract was recently signed between Britain’s biggest motor sport series and the UK broadcasting giant.

ITV has broadcast the series since 2002 – with its coverage levels increasing hugely in recent years – and this latest contract will take the partnership into an incredible 20th year.

With the current term concluding at the end of next season, this new contract commences from 2017 and will see the broadcaster continue to screen the series live on its free-to-air ITV4 and ITV4HD channels, with at least seven hours of coverage from each race day.

Highlights programmes will also continue to be aired on ITV4, whilst qualifying will be shown via ITV’s dedicated BTCC website – www.itv.com/btcc. All transmissions will be streamed ‘as live’ via itv.com with highlights programmes being available to watch via the newly launched ITV Hub. The ITV network screened more than 230 hours of BTCC coverage in 2015.

This latest news follows yesterday’s announcement that Dunlop has also committed to a further five years as title sponsor and official tyre supplier to the BTCC from 2017.

In little over four months since securing the rights to continue managing the BTCC until at least 2022, TOCA has now also contracted with its title sponsor, television, tyre and technical partnerships all for that same period, further cementing its position as the most successful motor sport series in the UK.

Alan Gow, BTCC Series Director, said: “This is fantastic news and yet more evidence that the BTCC is right at the top of its game. Not only is this the lengthiest broadcasting contract in the BTCC’s history but it’s also the longest sports contract signed by ITV4 – a real testament to the standing of the BTCC, not only in the motor sport world but also within mainstream sports broadcasting.

“ITV’s commitment is second to none – the programme production is first class and to have received a record breaking 233 hours of coverage in 2015 is phenomenal. I’m delighted that our new contract maintains the same quality and quantity of free-to-air coverage right through until at least 2022.

“This is also wonderful news for our teams as it will hugely assist in securing their own long-term plans and partnerships.

“It’s been a busy few months for me, but to have now secured our title sponsorship, tyre and technical supply contracts plus this unparalleled new ITV deal makes it all so worthwhile. And the fact that we enjoy more live free-to-air television that even Formula 1 in the UK is testament to not only the BTCC but also the dedication and passion expressed by the ITV Sport team.”

Niall Sloane, ITV Director of Sport, said: “ITV’s coverage of the BTCC for nearly 15 years has borne witness to the growth of this wonderful series. I’m delighted that this new deal allows us to continue our long-term partnership and bring the superb on-track entertainment provided by the BTCC free-to-air to viewers.”