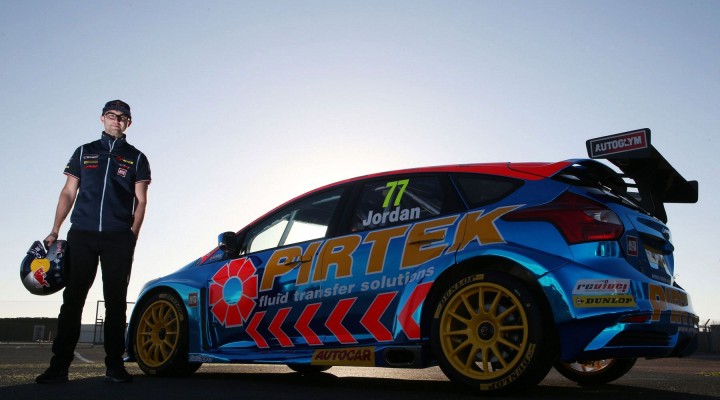 Jordan’s move to Motorbase created headlines when it was announced back in October and today’s striking car reveal is likely to do the same.

Following on from the well-received special one-off chrome edition of the famous Pirtek livery mid-way through the 2015 season, Red Bull athlete Jordan has worked in close conjunction with long-term backers Pirtek to create the spectacular eye-catching blue chrome effect design that will adorn the Motorbase Ford Focus ST in 2016.

“Moving across to Motorbase for next year we wanted to take the opportunity to change up the livery,” said Jordan. “The idea came from the fans reaction to the chrome livery from earlier this year and we wanted to find a way to incorporate the Pirtek blue.

“I’ve always said that it’s the best looking car on the grid and I think that’s definitely the case now.”

A confident Jordan was in buoyant mood when he spoke to btcc.net during the launch and he’s keen to get down to business as soon as possible.

“I feel at home here and have done from the moment I signed,” he continued. “We spoke with the team last year and then kept a close eye on their progress. We knew how capable the team is and when we realised how good the car was we decided to enter into serious discussions!

“It was an easy decision and one that I feel gives us the best chance of winning the title again. Being the 2013 champion already feels like it was too long ago so winning it again is a must – anything but being champion will feel like a disappointment.

“That’s not to say that it’s going to be easy of course. This championship is so tough and you have to have everything going your way in order to win it. You need luck of course but then you also need to plan meticulously, which is what we did in 2013 and we’re already doing here at Motorbase.”

Part of that planning includes ten test days ahead of the 2016 season, which will see the striking Pirtek racer likely hitting the track at Brands Hatch before Christmas and a schedule of running in warmer climates in the New Year.

“We’re going to go to Portugal in February,” said Team Principal David Bartrum. “We aim to be ahead of the game over the winter as winning the championship is clearly our objective.