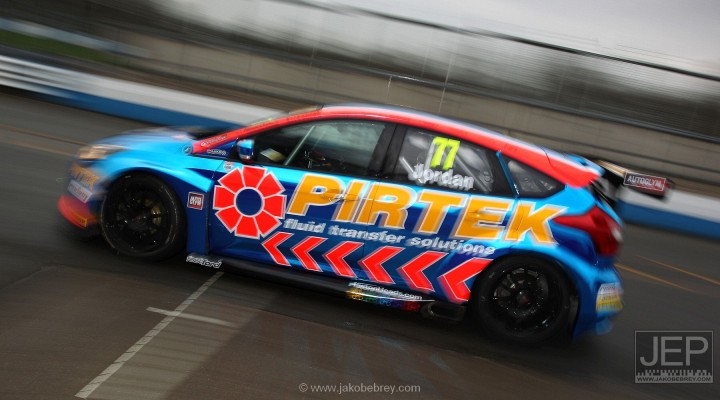 Andrew Jordan completed a faultless day of running in both dry and wet conditions as he continued his testing programme in the newly-liveried Pirtek Racing Ford Focus at Donington Park.

Jordan made his bow in the Motorbase-run machine at Brands Hatch last month but yesterday marked his first outing with the car fully shod with the latest RML components.

“We completed more than 60 laps and had absolutely no problems whatsoever,” he told btcc.net. “It was wet in the morning, then dried out, and then it rained again later in the afternoon.”

“There are always some frustrations with changing conditions but in truth it was actually good to get some wet running – we haven’t much of that in 2015.

“The RML parts felt very good and overall the car is just so responsive. We ran with RML’s suggested base set-up rather than trying to reinvent the wheel. We believed that would be the best way to start the process and to be honest the car was in the ballpark straight away.”

Jordan and Motorbase have an extensive testing programme planned over the winter, which bodes for a team and car that was arguably the cream of the crop in the latter half of the 2015 BTCC season.

“We were able to start some fundamental sweeps through set-up changes but we have much more planned in the New Year, and particularly when we test in Portugal,” continued Jordan. “The car is easy to drive but it’s always a much bigger task to learn everything, which is obviously one of the reasons why we have such a comprehensive testing schedule ahead.

“It’s a car that you feel fyou can really influence it. It’s so responsive to driver input and I drive very much on feel, so this suits me. You can hustle the car if needs be and it provides good feedback.

“We mostly did short runs, although we probably completed three quarter race distance on one run. Like I say, it was a really productive day but we have a lot more to do in the coming months.”

WIX Racing and Eurotech were also in attendance at the open test day at Donington Park, and we’ll be catching up with both teams in the coming weeks.