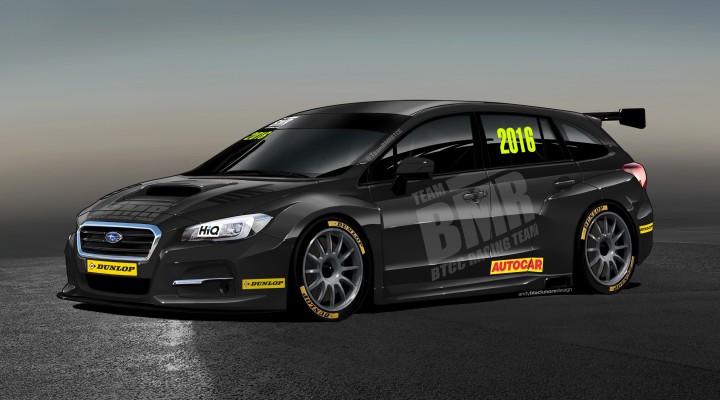 The squad will run the all-new Subaru Levorg Sports Tourer in this year’s series, with both Jason Plato and Colin Turkington spearheading the Japanese marque’s title assault.

“We’re very excited to have teamed up with BMR from the 2016 Championship – the first time a Subaru has competed in BTCC,” said Paul Tunnicliffe, Managing Director for Subaru UK & Ireland. “Although the Levorg features the Subaru famed all-wheel drive system, the car can be easily developed to compete with rear-wheel drive in order to comply with the BTCC regulations… so we can’t wait to see how it goes against very established competition.”

Subaru’s maiden foray into Britain’s biggest motor racing series will see Team BMR contest for Manufacturers’ Championship honours for the first time in its short career, something that Team Principal Warren Scott is hugely honoured by.

“I am extremely delighted that Team BMR are to become a Manufacturer team in only our fourth year of competing in the BTCC,” he enthused. “I have had aspirations of becoming a race-winning team with factory support from the very beginning and I am immensely proud of the team for giving Subaru the confidence to partner with BMR.”

In Plato and Turkington the outfit already boasts drivers with well over 100 victories and four drivers’ titles between them, suggesting the new Levorg Sports Tourer will be in extremely safe hands during its maiden BTCC campaign.

“Part of my role when joining BMR was to help secure a manufacturer deal,” said Plato. “The iconic Subaru brand has always been right at the top of my wish list. Obviously it goes without saying that I am very excited about our future together and I’m confident that BMR will produce a fantastic package for me to fight for the Championship. This really is exciting times for us all… I can’t wait for the season to begin.”

Turkington, who won his two titles in rear-wheel-drive machinery, was equally excited by the tie-up between Subaru and Team BMR.

“Continuing with Team BMR for the 2016 season was an easy decision for me and represents a great opportunity to build on our strong maiden campaign,” he said. “I can’t wait to get started with the development of the new Subaru Levorg BTCC race car and I’m more motivated than ever to win. This announcement is huge news for the Championship and equally for me.”

Under the guidance of Chief Designer Carl Faux, Team BMR – supported by the global technical resources of Subaru – will develop the new car and its famed four-cylinder boxer engine to full BTCC specification.

“It’s an honour to be leading not only Team BMR’s first ‘clean-sheet’ car design and build, but to be able to do this with Subaru’s new Levorg model is a real privilege,” confirmed Faux. “Engineering challenges is what the project presents – a new car, new engine and all the new generation TOCA components require a methodical approach. Establishing a three-year programme means we can focus on getting the basics right early before developing the package further over the following years.”

With the start of the season just two months away the team is working tirelessly to ready its cars for a testing programmes ahead of the official reveal at the BTCC Season Launch at Donington Park on 22 March. The squad will also confirm its full and final line-up over the coming weeks.

Subaru’s BTCC debut will then take place at Brands Hatch in early April for the opening rounds of the 2016 Championship, which Series Director Alan Gow believes will mark the start of a prosperous partnership.

“We are delighted to welcome another manufacturer to the BTCC and particularly one with such an incredible motor sport heritage,” commented Gow. “Subaru is an iconic brand with a huge following and its introduction to the BTCC is certain to excite our many fans both in the UK and around the world. No doubt Team BMR with its hugely experienced and talented driver line-up will make for a very successful partnership.”