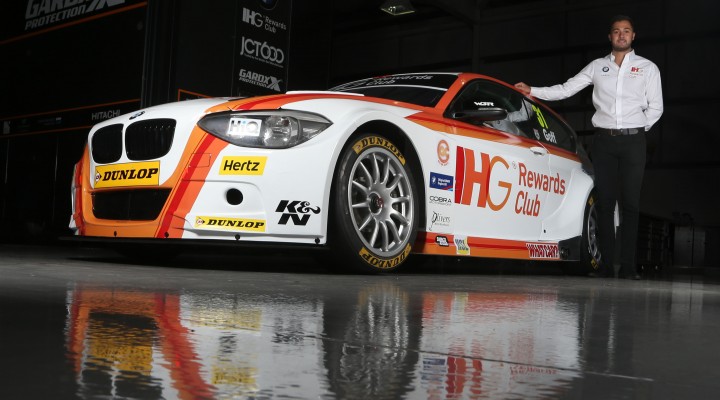 The proven race-winner has enjoyed a strong start to his relatively short BTCC career so far, with a number of podiums and a maiden victory at Snetterton last season being the outstanding highlights.

Team IHG® Rewards Club has put its faith in Goff as it too looks to build on a successful bow in Britain’s toughest motor racing championship. The squad experienced victory on two occasions in 2015 as it now looks to mount a serious championship challenge in only its second season of BTCC action.

Goff gets his championship chance behind the wheel of a West Surrey Racing built, prepared and run BMW 125i M Sport, which will be ‘officially’ unveiled in Team IHG® Rewards Club colours at the hugely popular Autosport International later today (14 January).

The High Wycombe racer will undertake a number of media duties at the event in Birmingham, as well as meeting some of the thousands of dedicated BTCC fans in attendance, before the serious business gets underway over the coming weeks.

Goff and WSR – under the expert guidance of its experienced Team Principal Dick Bennetts – will undergo an extensive testing programme ahead of the official BTCC Season Launch event on 22 March. The 24-year-old will then make his competitive debut for Team IHG® Rewards Club at the opening 2016 BTCC event at Brands Hatch in early April.

Jack Goff, IHG Rewards Club driver, said: “I am extremely proud and honoured to have been selected to drive for Team IHG® Rewards Club.

“Representing such a well-known brand, with a clear history of supporting racing talent, is fantastic and I hope to ‘reward’ the faith shown in me. Similarly the prestige of driving a BMW for a legendary team like West Surrey Racing represents a real dream come true for me.

“I’ve experienced BTCC podiums and took my first victory last season, so now I am looking at stepping up another level. Ultimately I want to become BTCC champion and challenging for the title is my immediate goal – I can’t wait to get started with WSR and Team IHG® Rewards Club.”

Adrian White, Director Brand Partnerships IHG, said: “IHG are proud to have had a close association with the BTCC for the past 10 years, firstly with the Holiday Inn brand and more recently with our loyalty brand, IHG® Rewards Club.

“In 2016 we are excited to welcome Jack Goff to Team IHG® Rewards Club as our new driver. Jack is an exciting young talent who is already a fans’ favourite in the TOCA paddock. We look forward to supporting Jack throughout the season, giving our guests the inside track with updates, competitions and experiences as well as seeing Jack and WSR on the podium this year.”

Dick Bennetts, WSR Team Principal, said: “We are very excited with IHG® Rewards Club’s decision to take Jack onboard, as we have watched him develop into a top BTCC driver over the last couple of years.

“The 2016 Dunlop MSA BTCC championship is shaping up to be another great season, so with Jack joining WSR it will further strengthen our already strong line-up in our BMW 125i M Sports, which are currently undergoing an extensive development programme.

“We have a lot of pre season testing planned, so that will be good for Jack to have time to adjust to our RWD BMW’s and study all the data we have from 2015.”