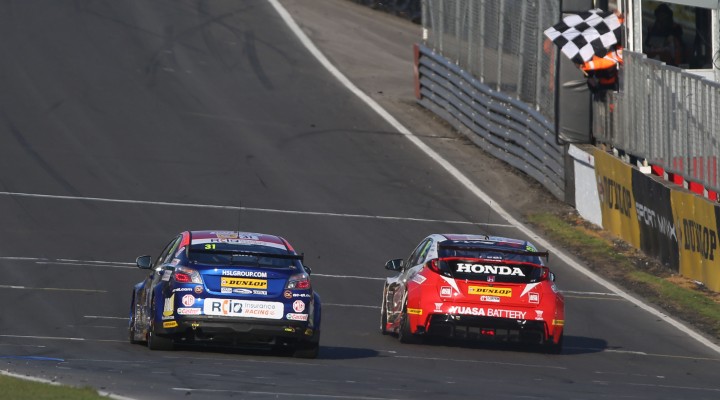 With the 2016 campaign on the horizon, over the coming weeks we’ll be looking back through all of the twists and turns from the down-to-the-wire 2015 Dunlop MSA British Touring Car Championship – charting the progress of the contenders and uncovering Gordon Shedden’s path to the title with Honda Yuasa Racing.

Back in April, the season got off to the most thrilling of starts with three different winners and a double round win for the all-new Honda Civic Type R. Rob Collard, Gordon Shedden and Matt Neal notched a victory apiece at the famous Kent circuit – all three races running to the wire, with each winning margin no more than a second.

Guernseyman Andy Priaulx stuck the WSR BMW on pole for the season opener though in the second half of the race his pace faded – Collard, his team-mate also in the 125i M Sport – took the initiative and the race win. Collard’s experience and nous saw him jump from fifth to second by the end of lap one, before trading places with Priaulx for the win.

Rounds two and three were Honda’s to savour.

The Pershore outfit took the first of a stunning double with Shedden taking the spoils in unprecedented circumstances – squeaking the win by just 0.040s from Priaulx to wrap up one of the closest, most enthralling BTCC victories in the series’ history.  A puncture for Plato effectively made the Priaulx/Shedden battle the fight for the race win after the BMR man fell off the road and into the gravel from the lead… a moment that could be considered key in hindsight as to how the championship would pan out.

Rob Austin made the jump from pole with a good opening spell in race three but the Exocet AlcoSense Racing driver eventually succumbed to Neal and the MG of Jack Goff. The latter pair made their move on lap 21 with Goff slipping through, past Austin’s Audi, right behind Neal at Paddock Hill Bend.

Goff kept Neal honest while former champions Colin Turkington, Jason Plato and Shedden all struggled – Shedden with a misfire, Turkington a spin and Plato with a mechanical issue of his own.

The BTCC left Brands with the tone set for a tight, competitive season – Matt Neal and Jack Goff sharing the championship lead with Aron Smith a point back in third. The top seven drivers were separated by just seven points. MG led the Manufacturers’ early running while Team BMR topped the Teams’ table.