How the season unfolded: Oulton Park 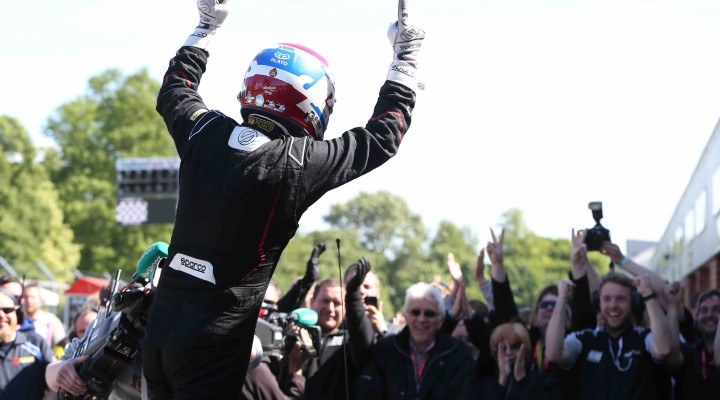 Oulton Park proved to be a vintage weekend for Team BMR and double Dunlop MSA British Touring Car Championship title-winner Jason Plato. The BTCC legend was the class of the field and took two victories, leaving Cheshire with the championship lead and fighting back from Honda’s strong Thruxton weekend which left Gordon Sheddon top of the standings.

After a first podium at Thruxton for JCT600 with GardX, Sam Tordoff went one better with his maiden win for his new outfit – as he took race three.

Plato pipped Matt Neal and Andy Priaulx respectively to pole for race one and headed the pack from start to finish – despite the best efforts of Neal in the Honda Civic Type R.

It was Priaulx who made the best getaway though. He looked like he may have got the better of the VW CC off the line and as the field headed down to Old Hall for the first tour. While his attentions were turned to the Team BMR man though, Neal pounced on the run down to Cascades. Despite heavy Priaulx pressure, Neal held his well earned second spot to the end.

After a commanding win in the opener, Plato produced a similar masterclass in the second race – fending off the race-long attentions of the other Honda – that of then Drivers’ Championship table-topper Gordon Shedden. A real tin-top tussle ensued, with the two trading paint, but Shedden couldn’t find a way past the wily BTCC legend in the VW, who held on by just 0.093s.

Plato’s win marked the 199th podium of his astonishing BTCC career and the first time in 2015 that a driver took the top step with the maximum amount of success ballast on board.

In a continued consistent start to the season, Andrew Jordan made the podium in third – keeping Plato and Shedden honest throughout. Honda’s haul was again a useful one in championship terms as Neal followed Jordan home in fourth.

As the BMWs of WSR’s Rob Collard and Priaulx came together, forcing them out of contention on the final lap following an ambitious move by the triple World Touring Car Champion, Sam Tordoff was able to steal fifth. Adam Morgan and Aron Smith followed shortly behind the WSR man. Tordoff had pulled two cracking moves on the pair – the best on Smith at Lodge in an audacious out-braking manoeuvre.

This move handed pole to Morgan for the final race. The Lancastrian had taken the final race at Thruxton an was in prime position to do the same in front of his home support. Unfortunately, he was adjudged to have jump started and had to take a drive-through penalty.

Neal inherited the lead after passing Tordoff at the exit of turn one but the Yorkshireman fought back. On lap nine, he’d reeled Neal in. Snapping at the midlander’s heels, Tordoff eventually pounced at Old Hall and made it stick. MG Triple Eight’s Jordan pulled the same trick a lap later, leaving Neal to complete the podium in third ahead of Shedden who’d fended Plato off in the latter stages.

With the circus leaving Cheshire, the championship had really started to heat up. Plato reached the summit, surpassing Shedden and taking a four-point lead. Neal and Jordan closed the gap to the top two, with now just 13 points between the top four drivers. Reigning champion Turkington dropped to fifth and would have certainly been looking to Croft to make a resurgence as the top four began to pull away.

In the Teams’ standings, status quo once more, although Honda Yuasa Racing edged their way closer to Team BMR.