BTCC stars soak up the spray at Thruxton 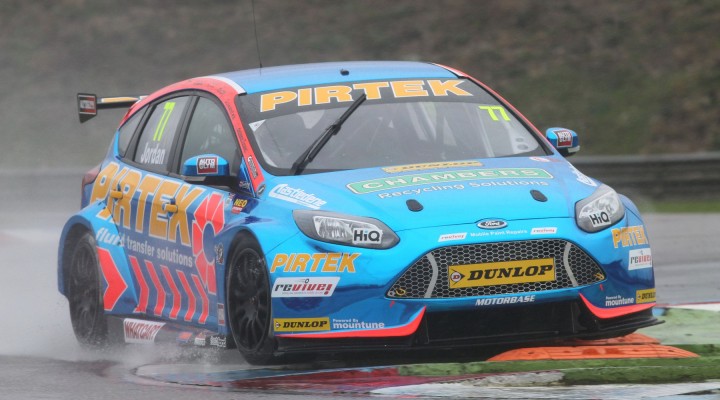 A quintet of Dunlop MSA British Touring Car Championship stars braved the elements on the opening day of Thruxton pre-season testing today (17 February) to lap up some valuable wet-weather running.

Former BTCC Champion Andrew Jordan was out on-track notching up the miles in his strikingly-liveried Pirtek Racing Ford Focus ST, and he was joined by Jack Goff in the IHG Rewards Club-backed BMW 125i M Sport.

Alex Martin similarly seized the opportunity to hone the set-up of his Dextra Racing Ford Focus ST around the fastest circuit in the country, whilst series newcomer Matt Simpson (Speedworks Motorsport) and Eurotech Racing’s Jeff Smith completed the field in their Honda Civic Type Rs.

Jordan was pleased with his afternoon’s work, as he settles into the Motorbase Performance team and gets to grips with the car that was the class of the field over the second half of 2015.

“It’s been good,” said the man who annexed pole position at Thruxton every year between 2012 and 2014 and holds the qualifying lap record in Hampshire. “We’ve done enough running and got somewhere near with the base set-up for the wet. It’s the first time we’ve run the new suspension kit in these conditions actually, but now we’re looking forward to some dry running tomorrow.

“Thruxton is so quick and probably my favourite circuit. From my very first test here, I loved it. You’ve got to be brave but you’ve also got to have a bit of finesse; you’re almost dancing with the car.”

Testing continues tomorrow (18 February), when Honda Yuasa Racing’s Gordon Shedden and Matt Neal, West Surrey Racing duo Rob Collard and Sam Tordoff and Smith’s Eurotech team-mate Martin Depper are all expected to join the fray – and the sun is forecast to put in a welcome appearance!