How the season unfolded: Snetterton 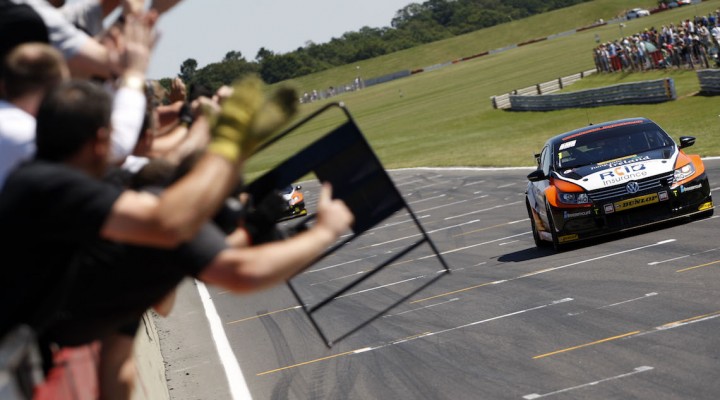 Alongside the pair of victories, he became the first driver of 2015 to take a second pole position after he bested Team BMR team-mates Jason Plato and Aron Smith – the squad producing their first BTCC qualifying 1-2-3 in eight years.

The Hertfordshire outfit’s Saturday pace was a sign of things to come as they completed a podium lockout in the weekend’s opening bout, with Turkington leading Smith and Plato home.

Turkington led the trio of Volkswagen CCs after fending off the attentions of Smith in the opening throes with the ballast laden Plato seemingly unable to keep pace with the lead VW. The Ulsterman had enough to lead lights to flag, though the gap remained fairly slim throughout the whole contest.

Things didn’t get any better for the Scot either, losing his advantage in the drivers’ standings as he failed to finish in either of the weekend’s remaining two races.

Turkington took race two, leading commandingly off the line and away from any ensuing drama in the pack behind. The Mercedes of WIX Racing’s Adam Morgan got the jump on the BMW of Sam Tordoff off the line, and fellow WSR man Andy Priaulx was also able to nip past the Yorkshireman before the end of lap one.

Collard’s nightmare weekend continued after a punt put pay to his race one efforts. Race two proved to be no better as he ended up in the barriers following yet more contact. Some heavy tin-top tapping saw Shedden, Aron Smith and Matt Neal all also fall out of the running and into retirement.

This handed the opportunity to the other title runners and riders – Turkington leading Morgan and Priaulx home. The incidents saw Plato capitalise to lead the championship with his fourth placed finish.

Race three saw reverse-grid pole-sitter and emerging young talent Jack Goff take a dominant victory – his first in the BTCC. The MG man stole a march off the line and immediately strung out a healthy gap to the rest of the pack with a series of strong laps heading towards the midway point in the race. Despite the natural waning of his tyre’s performance as the race wore on, he was able to fend off the advances of one of the most experienced BTCC campaigners in the series’ history, in Jason Plato, for a tightly-contested win.

Plato initially had a set-to with Tordoff and Priaulx’s WSR BMWs as he took the former off the line with a quick start before being passed by the latter by the end of the first lap.

Race one and two winner Turkington took Morgan on lap two, while Plato made the move of the day on Priaulx, steaming through late on the brakes into Brundle. Morgan later made a mistake at Riches, backing himself and Turkington into the chasing pair of Jordan and Mat Jackson. With maximum success ballast on-board, Turkington could do little to hold the MG and the Motorbase Ford behind – duly, both did pass the VW CC.

With that, the top seven was set until the finish.

After a tumultuous weekend for Honda’s Gordon Shedden – Jason Plato was able to make a huge 26 point swing in the standings as he drew 16 points clear at the top of the table. Shedden was demoted a further place as a result of the reigning champion’s resurgence – Turkington now held second with Shedden slipping to third and Tordoff holding onto fourth.

Honda headed the manufacturers’ table but MG managed to reduce the deficit to just five points. WSR remained in contention back in third.

Team BMR topped the HiQ Teams’ order after a near-perfect weekend as they pulled out their advantage to Honda Yuasa Racing by a staggering 95 points.