How the season unfolded: Knockhill 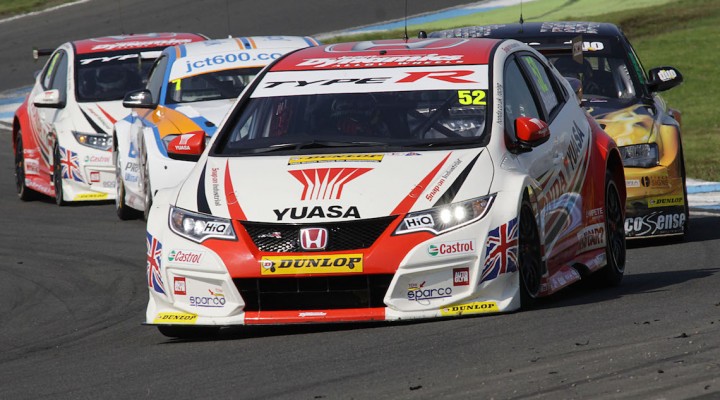 A trio of different winners plus highs and lows for the championship’s major protagonists ensured that the race for the 2015 Dunlop MSA British Touring Car Championship was blown wide open at Knockhill.

Rob Collard, Gordon Shedden and Matt Neal notched a victory apiece, while a number of title contenders had up-and-down weekends, leaving the title race in the balance with three events to go.

Despite a record-breaking qualifying lap securing pole for West Surrey Racing’s Andy Priaulx, it was team-mate Collard that was first past the finish in the opening race of the weekend.

Guernseyman Priaulx burst off the line from pole but immediately had the close attentions of Mat Jackson’s Ford Focus to deal with. By the end of the first lap, Jackson was through as WSR stablemates Collard and Tordoff went tête-à-tête for third. The BMWs were looking after their Dunlop SportMaxx tyres nicely and all three WSR men flew in the final throes of the race.

Priaulx hunted down Jackson and made an attempt on the lead as he exited the hairpin, but the Motorbase Performance man was having none of it ­as he forced the triple world champion wide. With this, Collard saw his opening and needed no second invitation to sneak by into second.

The BMW then set about the Ford as Collard closed in on the lead. Down at the hairpin it was déjà vu as Collard tried the same move once more, sliding the 1 Series past the Focus. Jackson’s defence of his position was in vain, meaning the WSR man had the lead and duly went on to claim the race win.

Despite some argy-bargy between Jackson and Priaulx, the order behind Collard remained as such until the finish – Tordoff close behind, rounding out the top four.

Shedden sent the crowd into raptures on home soil, with the home support out in their thousands to roar the Scot onto victory in race two.

He wasted no time in hounding polesitter Jackson as the pack jumped off the line but it took until the fifth tour for a real move on the #4 machine to materialise from the Honda man. It was a brilliant move at Clark’s, the kind which Shedden has become renowned for with his attacking driving style. The 2012 champion never looked back from that moment as he cruised to an unassailable lead.

Jackson clung to second until lap 25, when race one winner Collard made a move stick. Once more the BMW 1 Series displayed its ability to maintain its pace to the last – especially impressive from Collard given he had the maximum amount of success ballast on board and started fourth.

Shedden’s Honda Yuasa Racing team-mate Matt Neal then got in the action, as he took the win in a thrilling finale at the 1.27-mile Fife circuit. Neal bided his time for 24 laps before pouncing – dive-bombing race leader Adam Morgan with just one full tour to go.

The A-Class duo of Morgan and Aiden Moffat made good ground off the line, storming into a comfortable one-two in the first portion of the race. Neal fended off old rival Jason Plato in the opening blows but the VW eventually began to lose ground on the Honda.

Neal then aimed squarely at the Mercedes’ in front. Back down the order, Plato had fallen into the grasp of the chasing pack. Rob Austin headed that gaggle with the BMWs of Priaulx and Tordoff slicing their way through the middle order.

Yorkshireman Tordoff took race two winner Shedden before making a stunning double move around the outside of Jackson and Andrew Jordan’s MG6. His efforts came to nothing however, as he fell off the black stuff after contact with Austin.

Priaulx had made his way by Austin’s Audi before recommencing battle with Team BMR RCIB Insurance racer Plato for fourth. A gentle coercion from Priaulx across the line was followed by a second tap on the next tour, allowing both the Guernseyman and Austin through past the two-time BTCC champion.

Priaulx then made advances on Moffat’s Mercedes. The youngster remained steadfast though until a bump on the exit of the hairpin gave the BMW a chance to power past on the penultimate lap.

It wasn’t to last though, as the clerk of the course issued a 3.5 second post-race penalty for making the pass under yellow flag conditions – thus handing third back to Moffat. It was a fantastic effort from the Scotsman on home soil to secure his maiden podium in the BTCC.

Up the field there was still a spectacular battle on for the lead. Following a period behind the safety car, Morgan lost a healthy gap built up to Neal. It was ultimately bad luck for Morgan that swung things Honda and Neal’s way. Morgan’s A-Class collected some debris that had worked its way loose from a back-marker’s machine. This unsettled the Mercedes and allowed Neal to make a Banzai move down at the hairpin for the win.

Plato still led the standings after what was an unusually low-key weekend by his high standards. Shedden held second, 11 points back with Neal just behind in third. Turkington, Jordon, Priaulx and Tordoff all remained in the mix though, with just over 40 points covering the top seven drivers in the standings.

Status quo for the Teams’ Championship, with BMR leading the way – although their lead had been significantly eroded, almost halved, by Honda Yuasa Racing.