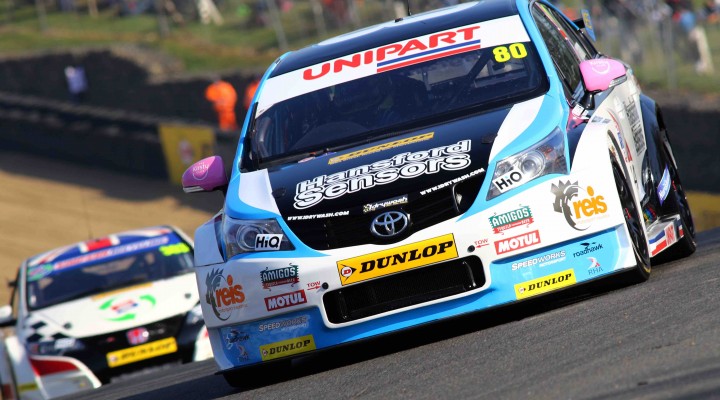 Speedworks Motorsport’s Tom Ingram secured his first ever BTCC pole position after setting an impressive lap record in the opening qualifying session of the new tin-top season at Brands Hatch. The result was also a maiden pole for the Speedworks squad and the first for a Toyota in the Dunlop MSA British Touring Car Championship since 2012.

Clear blue skies made way for a drizzly qualifying contest, although the early exchanges were run in prime conditions.

Ingram completed his benchmark lap after ten minutes of the session and became the first ever BTCC driver to set a time inside the 47 seconds bracket around the 1.2-mile Indy Circuit. Spots of rain fell before anyone could respond, leading to a greasy track and a flurry of cars heading for the pit lane. Conditions subsided almost as quickly as they had arisen, but the thin layer of moisture on the surface had seemingly put paid to further improvements at the top of the timesheets.

This left reigning champion Gordon Shedden – who was himself looking for a first pole position since Donington Park in 2013 – in second. The Scotsman couldn’t improve late on but his Halfords Yuasa Racing team-mate Matt Neal made every attempt as the circuit dried out.

Triple champion Neal produced a rapid effort in his Honda Civic Type R but still had to settle for third at the finish, whilst FP2 pace-setter Sam Tordoff was another to leave it late as he completed the second row order.

MG’s young gun duo of Josh Cook and Ashley Sutton continue to turn heads, with the latter pipping his team-mate to take fifth. Sutton starred in the official pre-season test at Donington Park last week and the reigning UK Clio Cup champion backed up that potential with a stellar lap in his first ever BTCC qualifying session.

Adam Morgan took seventh for WIX Racing while Team IHG Rewards Club’s Jack Goff deserves special praise in eighth. Although by no means his highest qualifying result, Goff was languishing down in 31st when the mid-session rain fell. Undeterred by the setback, Goff went on to complete a series of representative times under intense pressure as he rose to 24th, to 18th, to 11th and then eighth, ensuring that it was damage limitation for the BMW 1-Series driver.

Motorbase Performance racer Mat Jackson claimed ninth while Aron Smith recovered from an off-track excursion to round out the top ten. A number of others had minor moments, with both Stewart Lines and rookie Kelvin Fletcher running onto the grass in separate incidents.

The session proved incredibly close, with the top 22 drivers in the record 32-car line-up blanketed by less than a second. With success ballast not applicable until the second race of the campaign, this session was run under base weight conditions – the only time that it will be all season – and the ultra-competitiveness was there for everyone to see in Britain’s biggest and best motor racing series.

Subaru made its long-awaited BTCC debut after the Team BMR-run squad produced a herculean effort to ready four Levorg GTs in time for the Brands Hatch weekend. Without any representative testing behind them it was always going to be a tough challenge in qualifying, but the outfit responded with an impressive effort. Colin Turkington set the team’s fastest lap to take 11th, less than half a second behind Ingram’s pole position time.

Tom Ingram said: “We stressed all the way through the winter that we would only see everybody’s true pace in qualifying here, and it’s quite mental to think I’ve just taken my first touring car pole! I saw it was going overcast, so I knew we needed to put a ‘banker’ lap in early to be safe. All the guys at Speedworks have done an amazing job with the Avensis, and this is an absolutely superb result.”

Gordon Shedden said: “I’m very happy. It was a tricky session with the weather, but I’m over the moon to be starting from the front row of the grid. I think pole was probably within reach, but we couldn’t quite put it all together at the right time. It’s fantastic to have Matt [Neal – team-mate] right up at the front too, so hopefully we can hustle and race well as a pair tomorrow.”

Matt Neal said: “In a glass half-full way, I guess I should be pleased but it really didn’t quite work out given the combination of traffic, rain and other factors. The Honda was definitely capable of pole and I don’t like to miss out on such opportunities. Sitting in the car before the session started I thought anything but pole would be a disappointment, but we’ve got two cars in the top three and there are plenty of positives there.”

Sam Tordoff said: “Fourth is okay – I can live with that. We reproduced the same time as we did when we went quickest in second practice, but we probably came into the pits just as the track was at its fastest in the changeable conditions. Overall, though, it’s pretty good. We have put ourselves in a really good position on row two of the grid and we should be able to score some good points tomorrow.”

Colin Turkington said: “I’m a bit surprised to be so high up and I’m not sure that’s a true reflection of the car’s pace at this stage in its development. I really put my neck on the line doing that lap and I certainly couldn’t do 24 laps like that! The guys have done a great job simply to get all four cars out and running, so to be just outside the top ten is a great result for them. We’ve learned quite a bit today already; the car is reactive to changes. Now hopefully we can make it even better for tomorrow.”