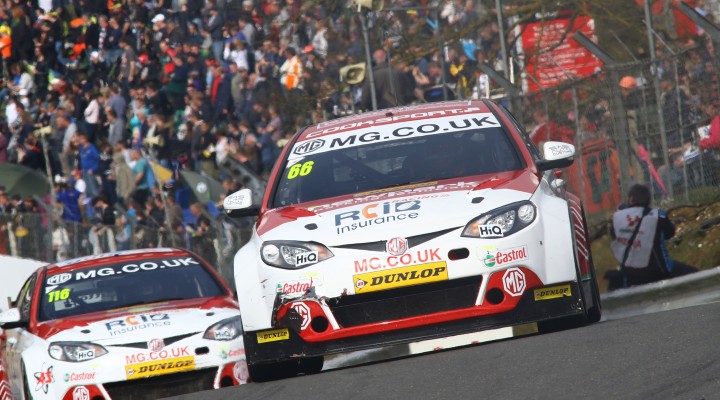 MG RCIB Insurance Racing pairing Ashley Sutton and Josh Cook are both looking to the podium after enjoying an outstanding weekend at the Brands Hatch season-opener last weekend, having first turned a wheel in the MG6GT just two weeks prior at the Donington Park Season Launch.

The youngsters caught the eye with strong pace at that Season Launch test session, with Sutton notching the second fastest time of the day – pipped marginally at the end of the session by experienced head Matt Neal, as the Honda man turned up the wick for his final run.

Sutton reprised his impressive form in practice around Brands’ 1.2-mile Indy Circuit, featuring up towards the sharp end throughout despite grappling with set-up issues in his MG Racing RCIB Insurance MG6GT. He was right on the pace from Free Practice 1, with a time just a tenth shy of quickest, despite those problems. In qualifying, both Sutton and Cook followed through on their promise shown in ‘non-competitive’ running by securing 5th and 6th place on the grid.

Sutton, 22 and reigning Renault UK Clio Cup champion, sees no reason why the Triple Eight Racing backed MG squad shouldn’t be looking to the rostrum given their showing so far.

“Well there you go, I have my first BTCC weekend under my belt! I personally set some targets to aim for and we definitely achieved them,” said Sutton. “Getting three top ten finishes was fantastic and to qualify fifth topped it off! I feel now we can move forward at Donington, we have a very quick car under us thanks to Triple Eight Racing considering the small amount of laps we have actually done.

“The platform is there so we can now build on this and move forward in the right direction and get the MG6 on the podium! I am also learning the craft of British Touring Cars so there is still more to come from me!”

On the other side of the team’s garage, Sutton’s slightly more experienced stablemate Cook echoed the same sentiments, bemoaning a couple of circumstances beyond his control that took the sheen off his weekend.

“I was really pleased with the pace of the car throughout the weekend, in comparison to a lot of the cars on the grid we had very little time in the car pre-season so we went into the weekend on the back foot. Qualifying and Race one was a glimpse of what the MG6 has to offer.

“Race two was purely unlucky for me with the oil on the track, a bit gutting but that’s the way it goes sometimes. It could happen to anyone. As a result we started from the back for Race three, midway through when I reached P14, we encountered a fault which halted my progress or I’m confident we could have recovered with a top 10 finish.

“The guys behind the scenes at MG RCIB Insurance Racing do a really great job. We’ve learned a lot this weekend, and Ash and I are doing well together as a team, hopefully we can soon get up on that top step. There is no question that we’re going to be giving it everything we’ve got.”