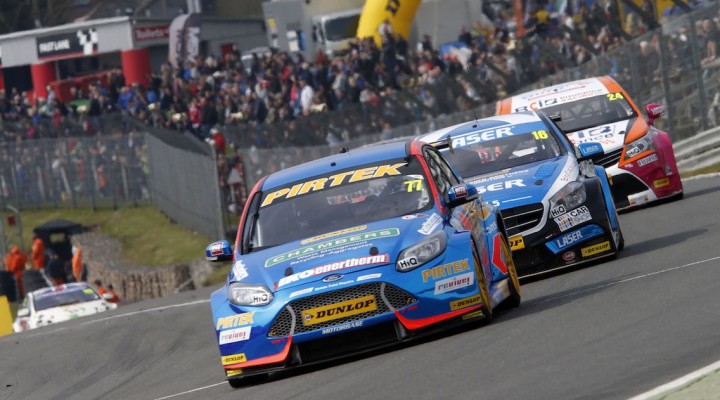 Andrew Jordan made a solid start to his Pirtek Racing career with a hat-trick of points-scoring finishes at Brands Hatch, the first encounter of the 2016 Dunlop MSA British Touring Car Championship, leaving him looking for more at Donington Park this weekend (16/17 April).

Round one at Brands Hatch yielded 11th place after changeable conditions during Saturday’s qualifying session left the 2013 BTCC champion down in 14th. Round two, though, saw Jordan finish an impressive fourth, right on the pace as he notched the fastest lap of the race – narrowly missing out on a podium.

Round three was the most dramatic encounter of the weekend for the Pirtek man as firstly, he pulled off a big save at Paddock Hill Bend to prevent his Ford Focus spinning off the curbs and across the bunched pack. Again on the pace, he then set off after Matt Neal in the closing stages, leaving it right until the last to out-drag the Honda to another fourth by just 0.037s right on the start/finish line.

With solid points under his belt, and two impressive fourth-placed finishes leaving him fifth in the championship standings, Jordan is optimistic ahead of Donington Park, his home event, having settled into his new team.

“Whenever you move to a new team, you take time to get used to how things work, but I feel I’ve settled in well with the guys at Motorbase and I would have loved to reward them with a trophy in a first weekend together.

“Had things gone differently earlier in the weekend at Brands, then that might have been possible, but we scored good points when we could and that is what matters when it comes to the season as a whole.

“We know we haven’t quite got the ultimate pace in the car at the moment but we aren’t far away, and I’m confident that we’ll be able to challenge when we head to Donington Park for round two.

“I’m looking forward to it. I’ve won there in the past and it’s my home event so I always get a lot of local support there. It’s a great old school circuit, really fast and flowing and it always makes for great racing.

“It was nice to get Brands out of the way in one respect and to get some points in the bag, but I want to step it up a gear in terms of outright pace and I think we can do that this weekend.”