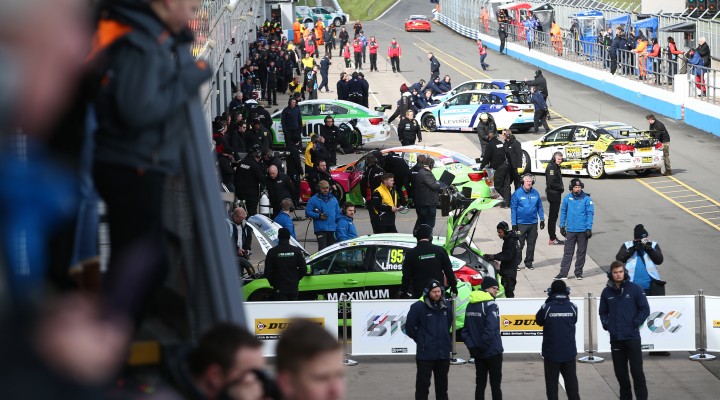 The unwanted interruptions from the earlier session were largely repeated in the second bout as red flag stoppages caused frustrations for much of the order. Alex Martin’s Dextra Racing caused the first suspension of play when his Ford Focus became beached in the gravel at sector two, whilst Warren Scott’s Subaru was the culprit of the latter. Power Maxed Racing’s Kelvin Fletcher also had a late off, which has caused substantial damage to his Chevrolet Cruze.

Tom Ingram’s Toyota led the way for much of the running and looked to have fended off all challengers as the clock ticked down. There was, however, just enough time for a number of drivers to improve in the closing moments, as Cook stormed to the top of the timesheets. The MG driver clocked a 1:10.129s lap time, which eclipsed Sam Tordoff’s similarly late effort by less than two tenths of a second, whilst Ingram ended up a further 0.050s further back.

Aiden Moffat made it four young guns in the top quartet in the Laser Tools Racing Mercedes, whilst reigning champion Gordon Shedden completed the top five order. Motorbase Performance’s Mat Jackson and MG’s Ashley Sutton were next up in the order. Jeff Smith, Aron Smith and Rob Collard completed the top ten. The top 16 drivers were separated by less than a second.

Josh Cook said: “We’re always tweaking, we’re always refining everything. Obviously it’s good that we replicated the pace from FP1. We’ve found a good eight tenths now and we need to do the same again to be near the front in qualifying, so head down, more hard work to try and refine the balance a bit more.

“The red flags have been a pain, I think they’ve ruined everybody’s flow but you need to cope with that and put in a lap when you need to. It’s going to be very similar in qualifying. I think a lot of it’s going to come down to finding a bit of space and having a bit of luck at the right time.

“Pole is what everybody’s pushing for but it’s not going to be easy. We’ll see what we can do. Anything in the top five would be ideal because I’m on a mission to pull some points back.

Sam Tordoff said: “It was OK, we just ran through our program and did our thing, put some tyres on at the end but to be honest with you it’s been a difficult day for us. It’s been very greasy and the track is very low grip – we struggled to get any heat in the tyres and I think you could see that from the times.

“We were about a second off where we were last year, which goes to show that the track just isn’t there yet. It’s difficult today with the amount of people that have been going off through the gravel and the grass. The weather has been better, and was getting better through that session – the track was getting a bit warmer. I think it’ll come to us in qualifying but how quick it will be is anyone’s guess.

“I’m not to sure where we’ll be. With the developments we’ve done over the winter, this will be the first real gauge of where we’re at. Given the nature of Brands Hatch, we didn’t really know the gains we’ve made. After qualifying we’ll know where we’re at.”

Tom Ingram said: “It was really strong. I’m feeling very hopeful just looking at the times. Everyone’s done their times right at the end on new tyres and we did ours on 25 lap old tyres so promising so far… We know the pace is going to come massively down for qualifying – another four-five tenths at least so I’m almost certain we’ve got more time to find, as has everybody else.

“The car felt very good. We were making quite a few changes throughout the session and it seemed to respond very well so we’ll see.

“We’ve got the best part 15kgs of ballast. We’ve got some in there but not a huge amount so performance wise it shouldn’t affect us anywhere near as much as the guys at the front of the championship. It should be fairly interesting. We want to try what we did at Brands. We know it’ll be difficult but hey, we’ll give it a good shot – you never know.”

Qualifying for Round 4 of the 2016 Dunlop MSA British Touring Car Championship will take place at 15:35 and will be streamed via www.itv.com/btcc