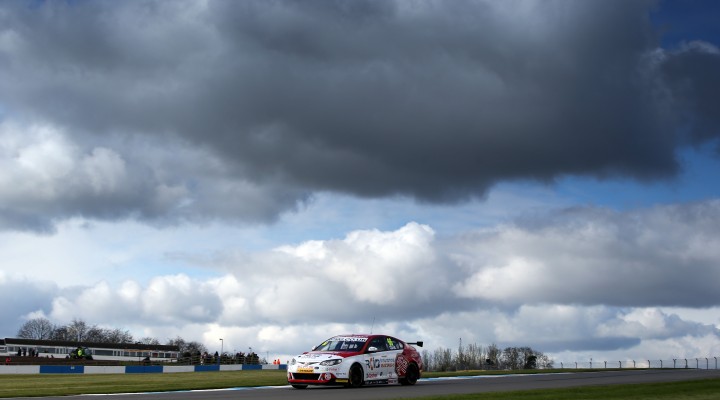 Running was halted on two occasions to retrieve stricken cars from the gravel traps of the Leicestershire circuit, with the latter stoppage bringing an early end to proceedings.

Cook featured throughout, however, having topped the times from the midway stage. Despite the interruptions, the young talent then responded to a late challenge from reigning champion Gordon Shedden, as 24-year-old Cook became the only driver to dip into the 1:10s bracket in the closing moments.

“I didn’t even know my time,” said Cook. “We were just trying to find out a decent balance for ourselves. We had a strong weekend at Brands, and had a bit of bad luck really so we want to come here and make sure we claw back as many points as we can really. Good first session, but still a lot to work on. It could be mixed conditions for the rest of the day but we want to make sure we’ve learned as much as possible before qualifying.

“The car feels great. There are still a few things to work on as I’m sure everyone would say. I love this track but that doesn’t mean anything sadly. We’re just going to be knuckling down and getting the best out of me and the car – hoping to be up at the sharp end.”

Shedden’s Honda Civic Type R – running on near maximum success ballast – hit the front with three minutes to go, but eventually had to settle for second following Cook’s late flyer.

“It’s early days yet but it’s OK,” said Shedden. “We were just trying to find the balance as everyone else was trying to do but it went decently. It didn’t help that it was a bit of a fragmented session with a couple of incidents throwing red flags. I think we need to take another step forward but it’s a decent place to start. We’ll reload and go again in FP2.”

A quintet of race winners and former champions followed in the timesheets as the Fords of Mat Jackson and Andrew Jordan sandwiched Aron Smith, Colin Turkington and Matt Neal in fourth, fifth and sixth respectively. It was a particularly impressive run from Ulsterman Turkington as he hauled the new Subaru Levorg into the top five.

Jake Hill will have been buoyed by his eighth place finish, while MG’s Ashley Sutton and WSR’s Rob Collard rounded out the top ten.

The cold conditions and rather disjointed nature of the session made it difficult to make any real judgement, however, with lap times well over a second off Jason Plato’s 2014 qualifying lap record.

Eurotech Racing endured a rather miserable run as both of its cars went off as part of the first red flag stoppage, whilst off-track moments for Mark Howard’s VW and Matt Simpson’s Honda caused the early end to the session.

Free Practice Two will take place at 12:50 will live timing and commentary available via the BTCC Live Zone. Qualifying will commence at 15:35 and will be streamed exclusively at www.itv.com/btcc.