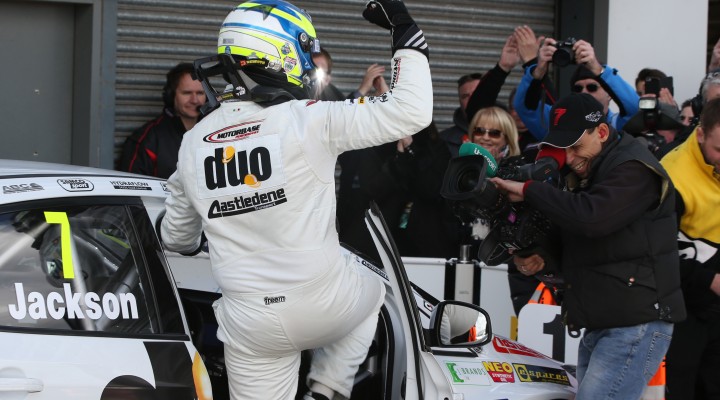 Pole-sitter Ashley Sutton bogged down off the line and dropped back to fourth while Josh Cook banged wheels with Jackson’s Ford Focus, but the latter was able to squeeze through on the run down to Redgate for the first time.

Sutton showed his steel by slipping back past the BMW of Rob Collard before the end of the first tour, and the two drivers would continue their duel for much of the contest.

Aron Smith’s VW was shuffled down the order on lap one while Warren Scott’s Subaru and Ollie Jackson’s Audi were fired into the gravel following contact, bringing about a brief safety car period.

Jackson pulled away from the MG duo following the re-start and was more than a second up the road at the midway stage. Cook was equally comfortable in second while Sutton was fending off fellow slow-starter Tom Ingram for third. The Speedworks man ran side-by-side with Sutton across the start/finish line on lap 11 before making the move stick through Redgate. A slightly ruffled Sutton was then further demoted by the BMWs of Collard and Jack Goff inside a few corners.

Collard’s Dunlop soft-shod WSR car began to fade late on, however, and Sutton eventually fought his way back up to fifth. Hampshire’s Collard held on to sixth from a surging Jeff Smith in the Eurotech Honda, who had himself blasted by the works Hondas of Matt Neal and Gordon Shedden. BKR’s Aron Smith recovered to finish eighth ahead of Sam Tordoff and Colin Turkington.

Shedden and Neal had to settle for 11th and 12th respectively but both used their soft tyre allocation in the opening contest, and will now lose all of their previous success ballast for race two.

The race came to a dramatic end in more ways than one as Matt Simpson and Daniel Welch made heavy contact at Coppice, whilst the Subaru of James Cole burst into flames in a completely unrelated incident. With just one lap to go and three cars littering the circuit in dangerous positions, the stewards were left with no option but to red flag the encounter, handing Jackson a deserved win from Cook and Ingram.

Mat Jackson said: “I looked at the MG guys’ starts from Brands and they struggled a little bit there. Starts are my strong point so I knew I’d have a chance. When (Sutton) sort of fluffed it, I thought ‘get in there’. We had a bit of contact with Josh Cook. I definitely got a bit of damage at the front but it was OK; I was hoping nothing had bent on the suspension and it was fine. I think Ash Sutton got a bit of a poor start and Josh was coming across, so it was just one of those things. Cook was quick over the early laps and to be honest, he was all over me, but I managed to withstand the threat and control it from there. It’s a good result and the car was on fire the whole way through!”

Josh Cook said: “It was a pretty interesting start. Me and Ash got off the line poorly and Mat just came straight through the middle. I maintained the gap until Tom Ingram came up to me at the end. It was like something out of a movie with cars on fire and all that! It’s a good result for our side of the garage and the MG Racing RCIB Insurance team as a whole with the work they’ve put into the car and the package they’ve put together. Hopefully there’s more in the car and more to come in race two.”

Tom Ingram said: “I made a terrible start in a plume of smoke with a load of wheelspin – it wasn’t my best. I read the first lap well, though, and made up a couple of places. I was trying to save tyres towards the end. I was looking after mine and Ash was going over the curbs fairly heavily with his. I closed up on him and followed him, and coming down the straight I thought ‘this is the chance’ – I threw it up the inside at turn one and made it stick.”