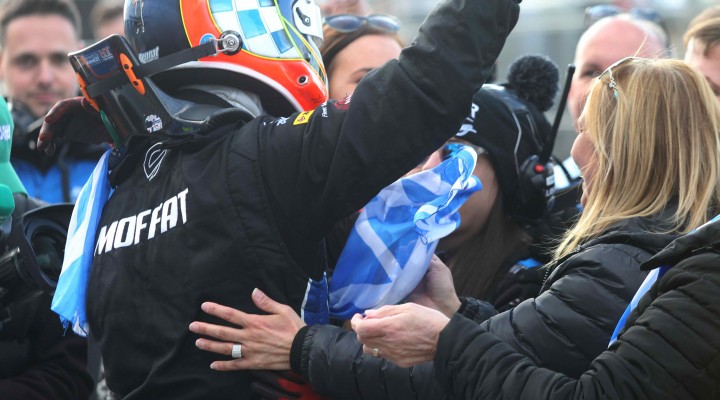 Changeable conditions during Saturday’s qualifying session at Donington Park marooned Aiden Moffat down the order bemoaning some rotten luck. Sunday’s racing, though, left the Scot in much finer fettle and looking to Thruxton with an air of positivity, as he recovered in fine style – scooping the Independents’ win in race three.

Rain, sleet, hail and even snow were just a sampler of the four seasons displayed at the Leicestershire circuit, all within the bounds of a breathless half-hour qualifying session.

As conditions improved towards the end of the session, ready for the Dunlop SportMaxx dry tyres, times tumbled and several lost out as Mat Jackson’s beached Ford Focus brought out a red flag with just minutes to go in qualifying.

The Laser Tools Racing man was thrilled at his recovery drive, culminating in that Independents’ victory with 7th in race three.

“I think ‘badly’ is a compliment for the way the start of the weekend went! It leaves you sulking a bit on a Saturday night when it goes like that,” said Moffat.

“We knew we had the pace and we knew we were capable of climbing up the field so at the end of three races to go from 23rd to 7th and get an Independents’ win is great for us.

“I was chuffed for that and it felt good to reward all the guys and girls for all their hard work.

“After qualifying, if you’d told me I’d end up on the podium I’d have bitten your hand off. It’s great to end like that, a bit of déjà vu after last year – working our way up the field and climbing up to an independents win in race three. It was a nice way to end the weekend.”

Moffat aims to carry the pace he knows the Laser Tools Mercedes harbours into the Thruxton weekend – a circuit he feels should suit the A Class.

“Thruxton’s a track I lack experience at, having only raced there twice – both times in the touring cars. That’s always a small worry but last year we came on a lot there.

“In the Chevrolet, we struggled a lot but last year in the Mercedes we were able to learn the track a bit more because the car felt good.

“I’m a lot more comfortable with the car now. I like how the car handles at high speed, low speed and on the brakes – especially those at Thruxton with the fast sections and then on the brakes. I think we should do well.

“The Mercedes lacks a little bit of straight-line speed. It’s not very good aerodynamically but the chassis means you can keep momentum.

“Although Thruxton’s fast, you need that little bit of momentum so I think we should be OK.”