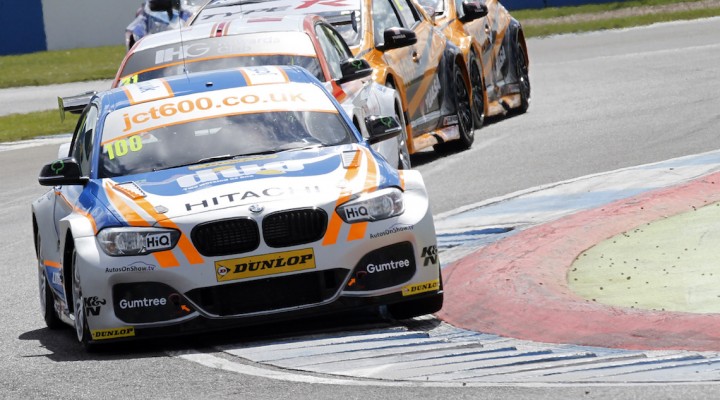 Collard provided the Sunbury-on-Thames outfit with its result of the weekend last time out, firing his BMW 125i M Sport to victory in race two in Leicestershire at Donington Park.

The Hampshire racer was delighted to kick-start his season after disappointment at the Brands Hatch season opener. Next up it’s home turf for Collard at Thruxton.

“It’s a brilliant feeling to get a win under my belt so early in the season; and at a circuit where we hadn’t expected to be quite so strong either,” said Collard. “I knew there was a chance to win in race two, especially after coming out of the first corner in third place.

“I could see that Mat Jackson was pushing hard and knew his tyres would start to drop off, and it was just a case of waiting for the right moment to make my move. To add a fourth and a sixth and be the highest scorer of the weekend is fantastic and I can’t wait to go to my local circuit, Thruxton, next and push on for more of the same.”

Yorkshireman Tordoff capped his weekend with a podium in race three as well as the fastest lap, propelling Team JCT600 with GardX over the line to take the HiQ Teams’ Trophy and second in the Teams’ standings. Combined with Jack Goff’s three sixth-placed finishes, WSR are well poised a fifth of the way through the 2016 campaign.

Thruxton is next on the calendar. Though it traditionally doesn’t favour rear-wheel drive machinery, the following events at Oulton Park and Croft should, and have done in the past – four out of six round wins at the two events in 2015 for the Surrey squad.

Team Principal, Dick Bennetts feels WSR are placed ideally to push on in the championship standings, given the events on the horizon and a successful weekend at Donington Park – traditionally a circuit that hasn’t always been the kindest to his outfit in the past.

“Today has been a really strong day for the team, and more than makes up for a difficult qualifying session on Saturday,” said Bennetts.

“For Rob to get his first win of the campaign is really pleasing and he’s picked up the most points of anyone in the BTCC across the weekend, while Sam has put in a fine recovery today having really lost out to the red flag in qualifying.

“Jack has again shown how important it is to be consistent this weekend and to make it six points finishes from six races this season is a very good start.

“The most pleasing thing is that Donington Park is a circuit that hasn’t always been kind to us, but this year we have picked up some strong results, out-scored all the other teams and taken a fastest lap to leave us very well-placed in the championship battle.”