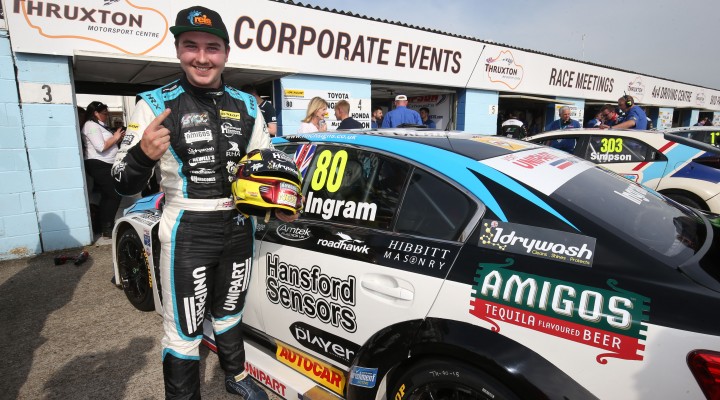 Tom Ingram has taken his second pole position of the season after the young gun broke the Thruxton lap record during qualifying for Round 10 of the 2016 Dunlop MSA British Touring Car Championship.

The Speedworks Motorsport driver experienced a stressful opening to the session as he had his first two flying lap times removed by officials for not respecting track limits. Ingram wasn’t alone in being pegged back, however, as a host of drivers were penalised for cutting the final chicane in the early stages.

Championship leader Matt Neal was among those to be demoted, but the multiple champ responded brilliantly with a staggering lap time in his ballast-laden Honda Civic Type R. The Halfords Yuasa Racing driver held provisional pole until Ingram’s effort, and he would eventually have to settle for third due to a Flying Scotsman.

Ordinarily you would expect that term to be reserved for reigning champion Gordon Shedden, but on this occasion it was impressive teenager Aiden Moffat who wowed the crowds. The young Laser Tools Racing driver starred during practice earlier today and he duly backed that up by making the front row in qualifying – his best ever result.

Neal had parked his Honda long before the finish, believing that he’d dragged every last ounce of performance from his car. Although dropping to third late on, the experienced racer will be pleased to have fended off another eye-catching attack from MG’s young duo.

Ashley Sutton and Josh Cook produced a front row lock-out at Donington Park last time out, and will start tomorrow’s opener from fourth and fifth on the grid, with the latter getting the better of his rookie team-mate on this occasion. Both drivers worked together for much of the session, benefitting from a tow through Thruxton’s high-speed sections for each of their best-timed tours.

Adam Morgan confirmed the performance of the Mercedes A-Class by planting his WIX Racing machine inside the top six – a result that had seemed some way off earlier today after a high-speed shunt forced the squad to produce some substantial repairs.

Jeff Smith made the top ten for the first time since Rockingham in 2013 as the Eurotech racer ended up just 0.015s behind Morgan. Andrew Jordan couldn’t match his practice pace and ended up eighth in his Pirtek Racing Ford Focus, whilst BKR’s Aron Smith and WSR’s Sam Tordoff completed the top ten order.

Tom Ingram said: “Awesome! Two poles out of three – that’s not a bad start to the season, is it? It was pretty sketchy early on, because I kept getting calls over the team radio saying ‘you’re quickest’, swiftly followed by ‘your lap time’s been removed’, so I knew I needed to calm down a bit. We had no ballast, which obviously played to our advantage and everything just hooked up perfectly. You’re never really sure where everybody is during practice and who’s sandbagging, but we knew we had some good pace in the car. The Speedworks boys are a great bunch of lads and having taken pole once at Brands Hatch, it instilled in us the belief that we could do it again – and now we have! I could definitely get used to this feeling. Pole position is one thing, however, and it’s vital that we now go on to score some good points tomorrow.”

Aiden Moffat said: “It’s a great feeling obviously. We came in a bit early and you’re sitting in the pits and it’s the most nerve-wracking thing in the world when you’re expecting a few names to creep up there. Before this, my best was eighth so to get right up there is brilliant. This year has been our best start since we’ve been involved in the BTCC. The guys in the team have given us a great set-up and a great car and it was all down to me then, and thankfully it all clicked. We’ll certainly be pushing hard. If Tom gets away well, he’s a fast, fast driver and it’d be silly to get caught up battling him. He’ll be a great person to try and latch onto. Matt Neal is always charging hard to try to get to the front, so my mirrors will be full if I can keep him behind off the start. You never know what will happen, but we’ll definitely give it a good go.”

Matt Neal said: “After making some changes between free practice and qualifying, I was hoping for the top six but thinking top ten was more realistic, so I’m over the moon to end up inside the top three. The Honda Civic Type R was just hooked-up, and I was certainly pretty committed round the back of the lap. The race might be a different affair for us – I’m not sure we will be quite so strong over a long run – but we’ll try to stay out of trouble and see what happens. Thruxton is notorious for tyre wear, so we’ll need to remain mindful of that.”

Josh Cook said: “It was a hell of a lap, I’m not going to lie! What we managed to get out of that car was awesome. Ash and I were really working well together, which is how we got the time – he towed me and I towed him, and we got that extra time out of it. The guys have done a great job with the car. There is a little more to find just to extract that final bit – the top few are really on it. We can certainly race from here, so we’ll just try and convert it into some solid points and go from there.”

Ashley Sutton said: “I’m very pleased. We suffered a few issues in practice. Between the two sessions combined, I only put ten laps together leading into qualifying – to have had so little track time around here in a touring car before going and putting the car fifth on the grid, I’m over the moon. I really want to focus on looking after the tyres, but we’ve got to push forward. I want to start getting some podiums and that’s my aim – although to stay in the top five and score solid points would be just as good, to be honest.”