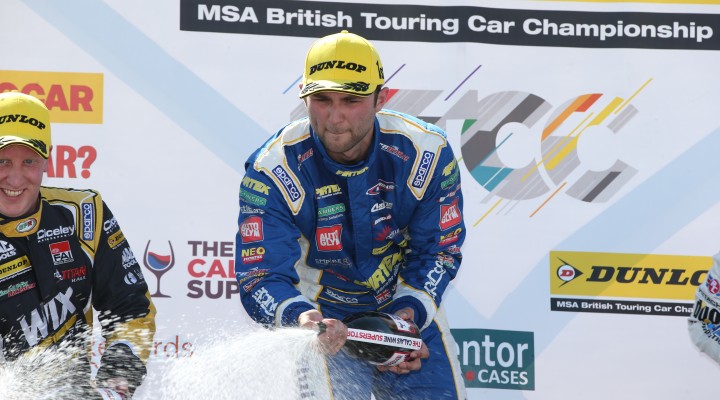 Andrew Jordan has joined a list of seven different race winners from the opening eight BTCC races in the 2016 season, after the Pirtek Racing driver produced an impressive drive at Thruxton.

Adam Morgan made a steady getaway from pole position and the WIX Racing driver coped well with the maximum success ballast in the first half of the race. Jordan had nipped by Tom Ingram off the line and worse was to come for the latter when he was adjudged by officials to have jumped the start.

A subsequent drive through penalty for Ingram forced him out of the fight as a gaggle of five cars moved into contention. Morgan led from Jordan and the WSR trio of Rob Collard, Jack Goff and Sam Tordoff with the BMWs coming alive in the battle for victory.

The moment of truth came on lap 11 as Jordan scythed his way past Morgan, with the Mercedes finally struggling with the weight. Morgan was shuffled down again by Collard’s Team JCT600 with GardX BMW, but he fended off further attacks from the now trio of cars behind him.

Eurotech Racing had all three of its drivers in the top ten at one stage but its two more experienced drivers would face heartache. Jeff Smith ran wide at high speed and left the circuit while Martin Depper retired late on. There was some respite with rookie Dan Lloyd, however, who drove brilliantly to secure seventh place and Jack Sears Trophy honours in the process.

Motorbase Performance’s Mat Jackson took eighth ahead of Goodestone Racing’s Dan Welch, who enjoyed his best result since Silverstone 2013. There was further joy for the plucky Welch when his number was picked at random in the reverse grid draw by Andy Priaulx, meaning the Proton racer will start the finale from pole position.

Handy Motorsport’s Rob Austin rounded out the top ten, ahead of Matt Neal and Josh Cook, who were both recovering from earlier disappointment in race one.