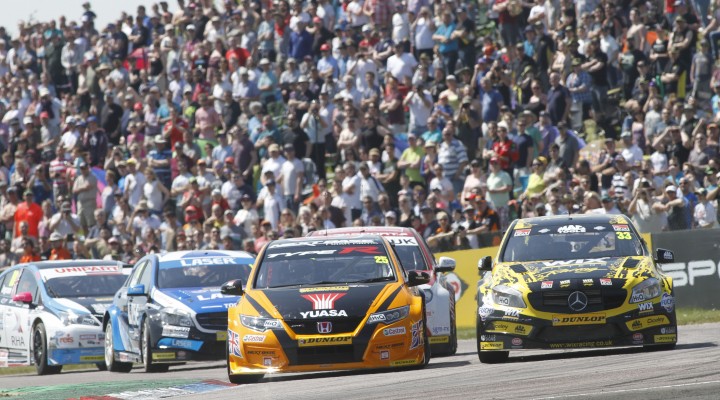 Rounds seven, eight and nine of the Dunlop MSA British Touring Car Championship at Thruxton this past weekend (7-8 May) proved a huge success with a record 33,000 fans descending on the Hampshire circuit for the third weekend of the 2016 campaign.

Spectators basked in the heat and sunshine as the BTCC provided yet more thrilling action with Adam Morgan, Andrew Jordan and Mat Jackson each walking away with a victory apiece.

The action didn’t stop with the BTCC though as the TOCA support package delivered wheel-to-wheel excitement around the fastest circuit in the UK.

With temperatures reaching 24 degrees on race day, those in attendance weren’t just treated to on-track entertainment with plenty to take in around the Andover venue – the British Army made their presence known with an Apache Helicopter sitting on display throughout the two days

Thruxton Circuit Managing Director, Bill Coombs, said: “It was a great weekend at Thruxton and one that saw one of the strongest crowds make their way through the gates since the Super Touring days. The numbers have been consistently growing year-on-year.

“We had fantastic weather all weekend and the appeal of the BTCC around the fastest track on the calendar continues to provide a great appeal to fans. The racing from the BTCC and the associated categories was simply sublime too, the level of competition has been raised even more in 2016 and that was apparent in every race.

“I would just like to thank all of the teams from Thruxton and the British Automobile Racing Club (BARC) for their continued support and hard work to ensure events like this past weekend run as smoothly as possible.”

The BTCC heads to Oulton Park for the fourth meeting of the season (4/5 June) before descending on a second BARC managed circuit, Croft, heading towards the halfway point of the season.