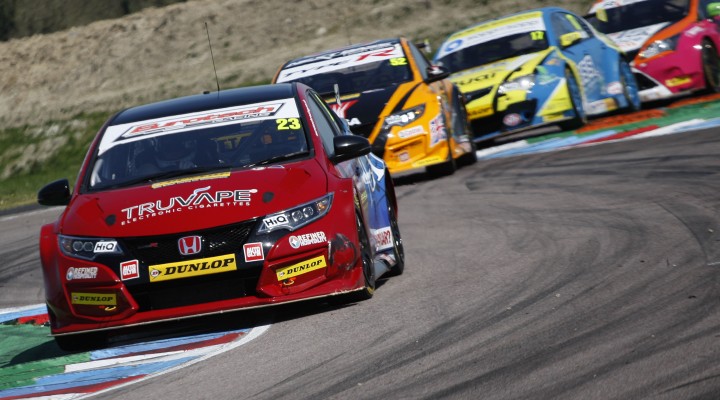 Eurotech Racing’s Daniel Lloyd made a strong impression on his 2016 Dunlop MSA British Touring Car Championship bow at Thruxton, picking up the Jack Sears Trophy for rounds 7, 8 and 9 with three points-scoring finishes.

The 24-year-old showed promise from the get-go – setting the 12th fastest time in the second of Saturday’s Free Practice sessions. Minor quibbles with the car saw him qualify a couple of rows back from his best effort earlier in the day, as he lined up 16th for Sunday’s opening race.

It was evident from the off that those that excelled in managing the car over a race distance at the notoriously abrasive Hampshire circuit would be well-placed to score points on a consistent basis over the weekend.

Lloyd brought the #23 Civic Type R home in 12th in race one, despite a slow puncture – discovered on his return to the pit-lane.

The Yorkshireman fared even better in race two. A great start saw him up to eighth by the end of the fourth tour with some firm-but-fair racing belying his rookie status. Lloyd came home seventh, after enjoying bouts with a few more experienced heads – reigning champion Gordon Shedden and Mat Jackson to name but two.

Third on the grid for race three after the reverse grid draw yielded an opportunity to Lloyd. A poor start and an eventual ninth placed finish left the Huddersfield racer frustrated – a marker of the high expectations he places on himself on even his debut weekend.

“Race two for me was by far the best race. I got a great start and the car felt mega,” said Lloyd. “The Eurotech guys did a good job and I felt really confident going into the final race starting in third.

“I didn’t get the best start in race three and the wheel spin lost us a few places so I’m a bit frustrated with myself for that but once we got settled again, we didn’t have the same pace in the car as we’d had in race 2.

“It was a bit of a battle to hold onto places in the end and I was quite pleased to have held onto P9.

“All in all it was a great debut weekend for us, we’ve come away with a really good set of results.

“This championship is all about consistency and three points finishes on our first weekend gets our campaign off to a strong start.”