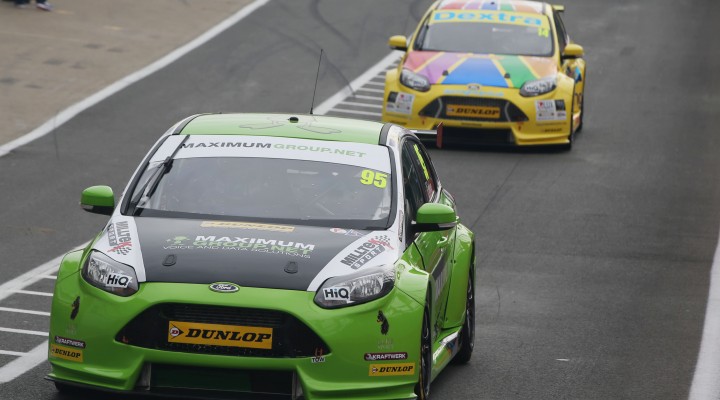 Aside from the Motorbase Performance duo of Mat Jackson and Andrew Jordan running Ford machinery in the Dunlop MSA British Touring Car Championship, there are of course two more fast Fords on the grid.

In addition to the Jackson and Jordan’s Pirtek Racing and Duo-backed machines, Dextra Racing and Maximum Motorsport each brandish Focuses – with Alex Martin and Stewart Lines, respectively, at the wheel.

Both men have a season’s worth of experience under their belt, having competed in the championship throughout 2015. It’s time to have a look at how the 2016 has treated them, with just about a third of the campaign completed.

So far, it’s been and encouraging start to proceedings for Martin and Dextra Racing. Though he has yet to match his previous best finish in the championship of 13th, which came in race three at Rockingham in 2015, the Dorset racer has already scored points – far earlier than he had managed to tally last season.

Martin’s Thruxton weekend built to a crescendo after opening proceedings with a strong 16th in race one, narrowly missing out on points, then another top-20 finish in race two. Breaking into the points-paying positions with 15th in race three was a fine way to bring an encouraging third race weekend of the year to a close. Scoring championship points as a small family-run outfit is no mean feat in the BTCC.

As the rounds have passed, Dextra Racing have continued to improve as they re-familiarise themselves with the ins and outs of the Focus after the off-season. It would be fair to say Brands Hatch Indy was a poorer weekend than was hoped with just one top-25 finish but since then, Donington Park and Thruxton have yielded promise – first indicated with a race two 16th at the Leicestershire circuit back in mid-April.

For Maximum Motorsport and Stewart Lines, it’s been a similar pattern of improving results as the squad dials in the Ford’s setup, with the Focus entering this campaign off the back of a full rebuild. Bests of 22nd and 21st at Brands Hatch and Donington Park respectively were improved upon by race one at Thruxton, where Lines crossed the line 19th.

Despite the withdrawal of the four Silverline Subaru Team BMR cars accounting for some of the improvement seen in Hampshire, the trend is still an upward one – and it’s fair to say that where teams have failed to finish, both Maximum Motorsport and Dextra Racing have ensured their entries make the chequered flag.

Following the Donington Park and Thruxton weekends Lines can feel the improvement, with the team heading in the right direction.

“The car was the best it has ever been in the past two outings,” said Lines. “We had a tough weekend at Donington Park to begin with, but the lads worked tirelessly to turn it around.

“It’s was a challenging start to the weekend at Thruxton, as it was at Donington, but a positive finish. We are going the right way – we just need to build from here.

“I’m really happy with how everything is going at the moment, I have managed to get a lot of seat time at the last two and I have learned even more about the car. Hopefully stronger results aren’t too far away.”