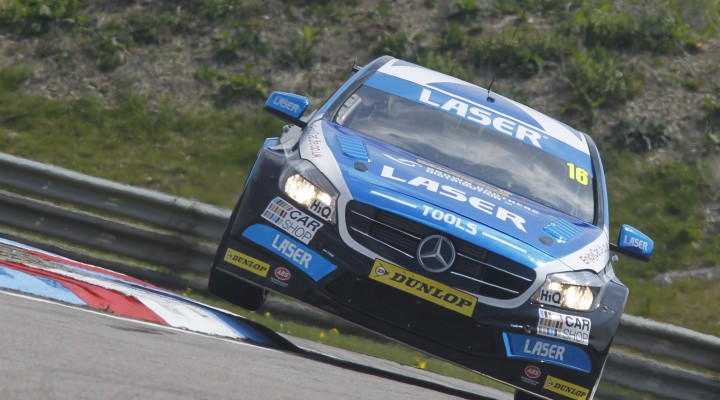 The three Dunlop MSA British Touring Car Championship rounds from Thruxton looked as if they would be among the most profitable yet for Aiden Moffat, following an extremely positive qualifying session. Saturday promise, it transpired, would not bear fruit come Sunday.

Laser Tools Racing’s young Scot followed up on a strong free practice showing by landing second spot on the grid – his previous best in the championship being eighth. Moffat admitted some surprise at achieving a place on the front row for the weekend’s opening race, hailing the job his team had done in prepping the Mercedes A Class.

“The guys in the team gave us a great set-up and a great car and then it was all down to me –  it all clicked,” said Moffat. “Initially I was in fourth and as the session went on I dropped a few places and ended up tenth, which was still looking like a good result for us.

“Going for my next run, I knew my lap time was quicker but I was thinking I’d be around seventh or eighth, so I was surprised with second! Even so, I was still a little gutted when I found out how close we were to pole position — just three-hundredths-of-a-second shy.”

The teenager was keen to keep expectations for race one in check following that encouraging qualifying display, indicating he would be aiming to mix it as best he could with the likes of Tom Ingram and Matt Neal around him, with a second podium finish in the BTCC in his grasp and firmly on the agenda.

When it came to lights out in race one, the Scot got away well but three into one wouldn’t go as he was caught around the outside on the entrance to the complex with Ingram and Neal battling. Contact damaged Moffat’s suspension and combatting the slide inevitably took some performance out of the Mercedes’ Dunlop SportMaxx tyres.

Damage sustained to his car would ultimately cost the 19-year-old what would have been a career-best result in the BTCC – beating his third placed finish at Knockhill last year.

“After contact at turn three, I had another coming-together which bent the steering, causing the tyres to constantly scrub across the surface of the track,” continued Moffat.

“I’d fought back to second and was trying to manage my pace and position rather than pushing too hard.

“Unfortunately, the damage (from earlier in the race) had already worked the tyres hard and that led to a puncture, resulting in us going off when we were sitting second.”

Race two was hindered by what happened in the opener, and further damage during the second race put pay to any hopes of bouncing back immediately – 16th place as much as Moffat could manage as he wrestled with the car.

Unexpectedly, after a sparkling performance on Saturday, Laser Tools Racing were heading into race three without tallying as much as a single point. Not many would have predicted that, but the BTCC has a habit of producing the unexpected.

The third bout of the afternoon would provide an eventual crumb of comfort – the blue and black liveried Mercedes setting the quickest racing lap of the weekend in the hands of the Scot. This served as a reminder of what could have been for Moffat at Thruxton – his pace was there but his luck was not. His outlook is one of positivity, though, with more than enough encouragement to come from Thruxton to take to Oulton Park and beyond.

“Race three started well, I got a great start and quickly made my way into thirteenth. However, crossing the line at the end of lap one, I got hit and was forced into the pits. After making my stop, my pace was good and I scored the fastest lap.

“Although the weekend’s results were hugely frustrating and disappointing, it actually has given me even more confidence as it has shown how good a car we have, how great the Laser Tools Racing bunch are, and that I am capable of being up at the front.

“We will carry this momentum into the next race, and hopefully give something more to show for our efforts on Sunday next time.”