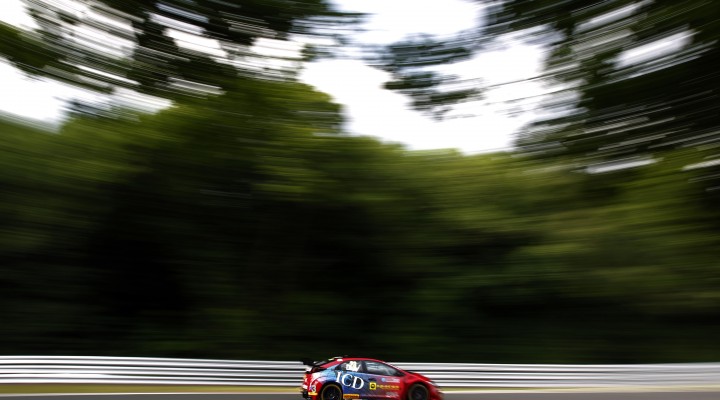 Following a one-off, points-scoring BTCC debut at Croft back in 2010, Lloyd returned to the fray at Thruxton after signing to contest the remainder of the season in a third Eurotech Racing Honda Civic Type R.

The 24-year-old Yorkshireman impressed with a double top ten finish in Hampshire and subsequently headed to Oulton keen to build upon that promising form, but he admitted that qualifying second – less than two hundredths of a second shy of pole position – exceeded even his own expectations. Not only that, but it was a lap that he almost didn’t complete at all.

“I was on the back foot until my last new set of tyres,” Lloyd revealed. “I’m still getting used to these Dunlops and understanding how to extract the most from them. It’s a learning curve for me, and it was a bit of trial and error initially.

“After Thruxton, people told me I’d done a good job, but I knew there was a lot more still to come and I’m over the moon to have proved that here. The guys at Eurotech have done a mega job and put in so much hard work, and I’m feeling a lot more comfortable in the car and starting to be able to do what I want.

“My first two runs weren’t ideal, and then on my third run, I messed up the first turn, missing the apex completely. I was tempted to abandon the lap, but from Cascades on, I nailed every single corner. It wasn’t a knife-edge lap by any means – it was all fairly neat and tidy and accurate.

“I’m a bit gutted about the mistake in the first corner, because it almost certainly cost me pole, but to be on the front row only second time out with Eurotech is unbelievable. I was really hoping for a top six position, so this is incredible. I’m over the moon.”