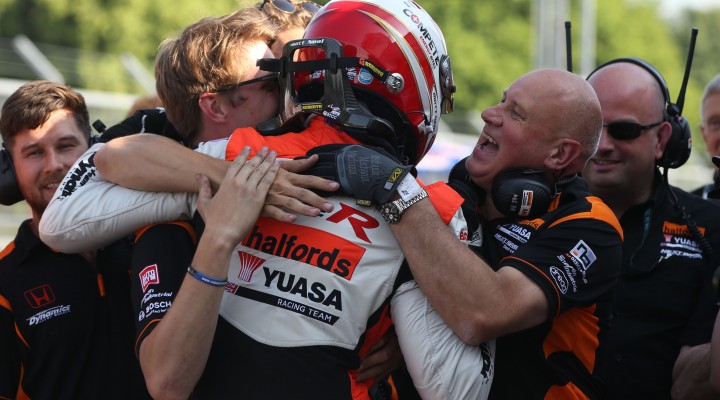 Tordoff tops Neal by just one point in the championship, with both drivers now pulling clear of the chasing pack after impressive performances in the final encounter in Cheshire.

Honda originally looked in place to score a one-two finish after Gordon Shedden muscled his way past Josh Cook’s MG on the opening lap. The two bright orange Civic Type Rs immediately pulled away from the rest of the field, but reigning champ Shedden was never close enough to challenge his team-mate. Disaster struck for the Scotsman on the penultimate lap when a puncture forced him out of contention.

Cook – already reeling from the earlier attack by Shedden – was now embroiled in a fairly heated debate with Tom Ingram’s Toyota, as the pair tapped and nudged their way through the entire contest. The battle would eventually play into the hands of the experienced Jason Plato. Ingram was run onto the grass as the gaggle of cars ran down to Lodge for the final time. The Speedworks star was detemined not to let Cook past, but in holding up his rival he merely opened the door for the Silverline Subaru BMR Racing car of Plato to run around the outside and steal the final place on the podium.

Rob Collard also made his final move on the run to the chequered flag, rounding off a staggering display from the Team JCT600 with GardX driver. The veteran had seemingly carved his way through the field in each of the Oulton Park races but misfortune had so far prevented him from scoring a top result. He would not be denied in race three, however, as he stormed from 25th to sixth – beating Colin Turkington’s Subaru to the line by just 0.041s.

Andrew Jordan was eighth for Motorbase Performance, whilst Jake Hill and Adam Morgan were provided with some positives following a bruising day of action. Hill had driven well in the earlier bouts but had to wait until the final race for a well deserved top ten finish, as did Morgan, who had wrestled balance problems with his WIX Racing Mercedes A Class for the entire weekend.