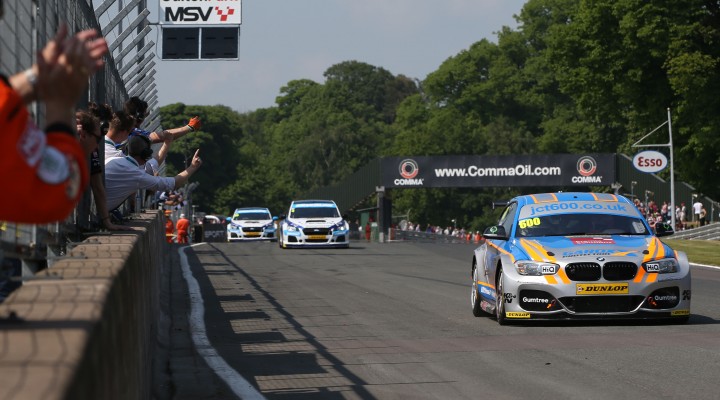 The Team JCT600 with GardX driver blasted his BMW off the line, past pole-sitter Colin Turkington, and never looked back. The unpredictability of the 2016 BTCC campaign continued as the Yorkshireman romped home to add his name to an ever-growing list of drivers to reach the top step of the rostrum. Incredibly Tordoff also now leads the standings despite only being sixth at the start of today’s action.

“Getting a good start was probably the difference between winning and coming second to be honest,” claimed Tordoff. “The key is consistency and that’s been the aim this weekend, it was all about getting the lead and just consolidating.

“I was cautious of what was going to happen in the second part of the race with Colin (Turkington) behind but he didn’t have an answer for us. We changed a lot in terms of setup between races one and two and the car managed the weight beautifully. Credit to the team and my engineer.”

Turkington and his Silverline Subaru BMR Racing team-mate Jason Plato squabbled over second for much of the contest, although the former eventually claimed the place comfortably from the BTCC’s most winningest driver. The Levorgs have been in impressive form throughout the weekend with Turkington and Plato making it a brace of double podiums from the first two bouts in Cheshire.

The race had begun in fairly dramatic fashion with a series of incidents leading to a brief early safety car period. Aron Smith’s VW ran wide at Cascades on the opening lap, shortly before Rob Austin’s Toyota made contact with Jake Hill’s identical machine at the Island Hairpin. The knock-on effect speared Hill into Mat Jackson’s Ford Focus, although the latter would go on to have a competitive race.

Much of the attention was on the flying Rob Collard following the restart, as the experienced race-winner continued his surge up the order from 23rd on the grid. The West Surrey Racing driver picked off car after car and was soon into the top ten, where he would then relegate his stablemate Jack Goff and Eurotech’s Daniel Lloyd further down the order.

Collard then joined Josh Cook and Matt Neal in a three-way tussle for sixth, which would eventually end the BMW man’s challenge. Cook and Neal had their own incident at Thruxton last month and the MG Racing RCIB Insurance man was determined to keep triple champion Neal behind him. The pair went side-by-side, making contact into Knickerbrook, but both the Honda and MG continued with only minor cosmetic damage.

WSR’s Collard then saw off Neal on lap ten and made his way past Cook’s MG two tours later. No sooner had he seemingly secured the move, however, that the BMW 125i M Sport ran wide on the exit of Old Hall. He returned to the circuit immediately in front of Cook and the two touched, which broke the rear-right suspension on Collard’s machine – he eventually limped back to the pit lane and into retirement.

Cook held on to take sixth at the finish from Neal, while Motorbase Performance’s Andrew Jordan made the most of the melee to nip by Jack Goff’s BMW into eighth. Jackson recovered from his own eventful run to take a top ten finish.