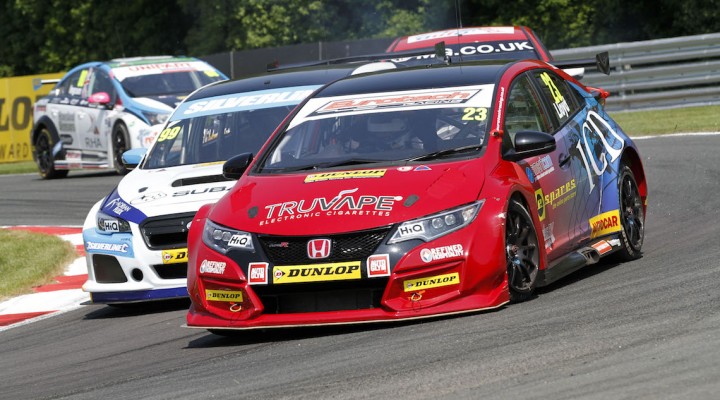 Eurotech Racing’s Daniel Lloyd followed up on an impressive, triple points-scoring debut in the crimson Honda at Thruxton with a further indicator of his potential as he scored a sensational front row, with second in qualifying for round 10 of the Dunlop MSA British Touring Car Championship at Oulton Park.

The Yorkshireman suffered a series of set-backs over the course of race-day, however, preventing him from capitalising on his undoubtedly impressive raw pace.

The weekend started in fine fashion as the 24-year-old came within just 0.019 seconds of pipping two-time BTCC champion Colin Turkington to pole. His time was enough, though, to secure a first front-row start for the Eurotech Racing outfit in more than two years.

“Getting P2 in qualifying on only our second time out in the Honda was mega! I’m still getting used to the tyres and learning how to get the most from them so to just miss out on pole was incredible,” said Lloyd.

“The Eurotech guys did a great job. The Civic Type R felt really good and actually I was a bit gutted about a mistake in the first corner as I think we could have got pole, but everyone was over the moon with second!”

Lloyd started strongly in race one before being edged out wide by the Gordon Shedden on lap two. He battled hard holding off challenges from Jason Plato’s charging Subaru for three laps before a move by the Silverline Subaru BMR Racing driver, later penalised, saw Lloyd drop to fifth. Struggling with the grip on the soft tyre in the latter stages, Lloyd had to settle for a sixth place finish.

Race two failed to deliver the improvements that Lloyd was hoping for with the #23 car struggling on the tight, twisty circuit, wrestling with 33kg of success ballast on-board. Despite his best efforts, a brake issue saw him drop down the order, eventually winding up 13th.

With some set-up tweaks, the team were full of confidence heading into race three. The Civic Type R bolted, immediately moving up in 10th in the opening laps before taking Morgan for ninth just after the mid-way point. Again suffering poor luck, Lloyd came off worst with contact as the pack headed into the chicane. He was forced off track with significant damage, ending the weekend early with his first DNF.

“It was unfortunate the way the races ended up after such a strong qualifying result but I have to take all the positives away from the weekend,” said Lloyd.

“I’m really, really proud to have put the car on the front row on only my second weekend in the car. That’s what we’re there to do.

“It’s still a steep learning curve for us in the BTCC and we’re still learning in terms of race set-up and pace. I had some really strong starts this weekend and took a big step forward from Thruxton. We have lots of positives to take into the next meeting at Croft.”