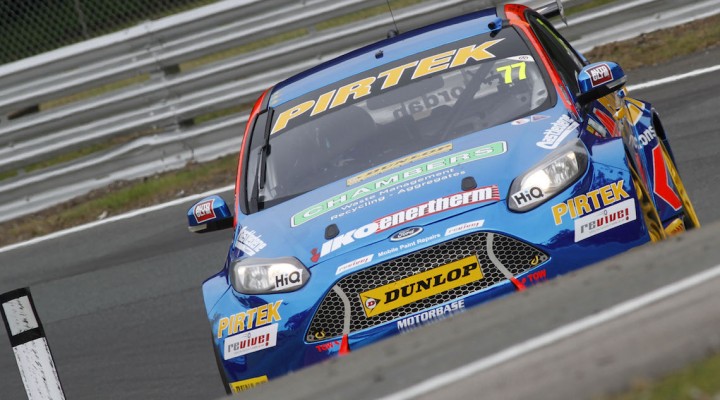 Qualifying on Saturday was characterised by its closeness. The first 22 cars on the grid were separated by just a second and with the Ford Focus STs struggling for outright pace with weight on-board, Mat Jackson could only manage 25th and Andrew Jordan 12th – though four-tenths from pole.

Race one was more positive for the Kent-based squad as Jackson improved to 16th while Jordan made 10th, scoring solid points. With ballast cleared, race two proved more fruitful. Duo-backed Jackson battled his way through the mid-field into the top ten, adding 15 points to his Independents’ tally. A similarly hard-fought bout saw the #77 Pirtek Racing Focus of Jordan home in 8th, enough to take the Independent Drivers’ championship summit.

The final round of the day was Jordan’s 250th race in the BTCC. He produced a sterling effort to bring the Focus home 8th for a hat-trick of points finishes, despite some hefty damage sustained in the 15 lap encounter. Meanwhile, Jackson – who also suffered the effects of contact – dropped down the order to finish 13th.

A difficult weekend, but the Motorbase squad were still able to pull away at the top of the Independents’ championship with a gap of 49 points to WIX Racing. In the Independent Drivers’ table it’s now Jordan leading the way and Jackson third.

Team Manager Oly Collins said: “After a tough weekend we’ve come away with our 100% reliability record intact, some important points finishes, extended our Independents championship lead and shown some good race pace. However, our poor qualifying results yesterday have proven too much to overcome for results today.

Andrew Jordan said: “I’m happy with our performance all weekend so it’s really frustrating to not get the results to show that. All things considered I think we’ve done a good job with what we’ve had but it’s not a fair reflection on the team. I just hope it gets looked at before we get to Croft.”