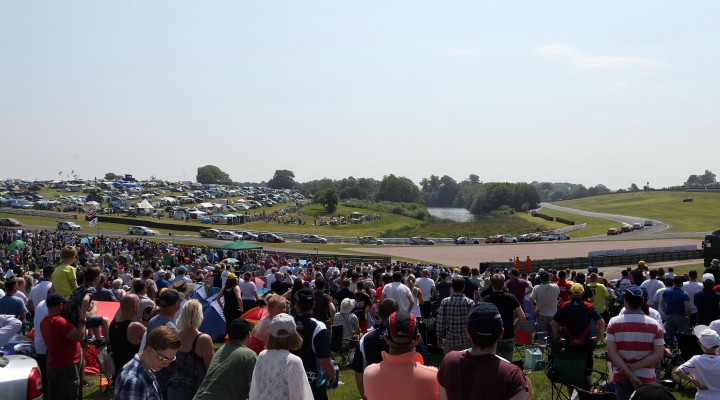 The Dunlop MSA British Touring Car Championship hits the midway point of its 2016 pilgrimage around the best of the UK’s motor racing venues, as a capacity 32-car field prepares for battle in North Yorkshire next weekend (18/19 June).

Some of the world’s most talented touring car drivers are still searching for a foothold in Britain’s premier motor sport series this season, with rounds 13, 14 and 15 at Croft now looking set to be a pivotal weekend for many.

Unpredictability has been abound this campaign, with nobody able to stamp their authority on an ultra-competitive championship. Nine different drivers have graced the top step of the podium from the 12 intoxicating encounters so far.

There have been an astounding six different manufacturers represented in the winners’ circle. Subaru scored an historic first BTCC victory in race one at Oulton Park earlier this month, much to the delight of all involved with the Silverline Subaru BMR Racing outfit.

The outlook in the Drivers’ rankings changed once again following the fourth race weekend of 2016. Now, West Surrey Racing’s Sam Tordoff, himself a Yorkshireman, leads the way from the Honda of Matt Neal. The Team JCT600 with GardX driver won race two and scored consistently throughout the Cheshire meeting and he’ll be looking for more on home ground. There is, however, just a point in it at the summit, with three-time champion Neal breathing down the Leeds-based racer’s neck.

A big crowd is expected to descend on the charming, challenging and charismatic Croft venue – not to mention the many more who will be watching the action live on ITV4 – as you’re always guaranteed fireworks when the BTCC comes to town!

Talking point: Croft challengers
An incredible turnaround for the Subarus at Oulton Park has thrown the pecking order even further up in the air, as if it wasn’t already competitive enough in the fight for the BTCC crown. Colin Turkington took a surprise pole position last time out and followed up with a commanding lights-to-flag victory in the opening race in the north west a fortnight ago, leaving early-season teething problems for the Team BMR-backed effort far behind.

Croft, a circuit that naturally favours rear-wheel drive machinery, could well provide further encouragement for the BMR boys – including for a certain BTCC legend hailing from the north east, one Jason Plato. Like Turkington, his expectations will undoubtedly have taken a turn for the better as his 2016 season sprung into life with a triple podium at Oulton – issuing a firm ‘I’m back’ message to his rivals in the process.

Turkington, dubbed the ‘King of Croft’ from his exploits in campaigns past, will be looking to capitalise on winning form and the nature of the circuit to push his points tally up yet further. The intra-team battle between the Subarus will be fascinating in itself.

The BMWs usually fare extremely well around the classic Darlington venue. With WSR leading the way in the Manufacturers’/Constructors’ table after an outstanding effort from Yorkshireman Sam Tordoff to notch two podiums and a win a fortnight ago, they will be looking to consolidate and celebrate next weekend. As well as Tordoff you can also expect his stablemates – Rob Collard and Jack Goff – to be there or thereabouts.

Halfords Yuasa Racing duo Gordon Shedden and Matt Neal both had solid showings at Oulton. The latter dominated race three in fine style while the former continues to score strong points, leaving both in the thick of the mid-season title picture.

There willl be no shortage of challengers next weekend, with the likes of Andrew Jordan, Mat Jackson, Adam Morgan and Tom Ingram among the 2016 race winners looking to reach the top step of the rostrum again.

The no-holds-barred and unpredictable racing provided by the Dunlop MSA British Touring Car Championship is not only what the fans love, but also serves to cement its position as the country’s top motor sport series – it is certain there will be more on offer at Croft if the first four events of the season are anything to go by.

Local Heroes: Plato pumped for home run
“I always enjoy racing at Croft,” claims Jason Plato, who grew up in nearby Newcastle. “The phone invariably rings with friends contacting me for tickets, but in truth it’s great to see familiar faces there. The racing is always good up there. It’s a rear-wheel drive track and I think it’ll suit the Subaru, so I can’t wait for the weekend.”

The spring is clearly back in Plato’s step as the touring car legend also reflects on the last event at Oulton Park, where the Silverline Subaru BMR Racing squad really arrived in the BTCC.

“It was a great weekend,” he enthuses. “Whilst there was never any doubt in the team’s mind that it would come good, we were especially looking forward to Oulton. We’d done quite a lot of development, so we were feeling up for it.”

Team-mate Colin Turkington took a win and another podium, whilst Plato scored a hat-trick of rostrums from the triple-race encounter at the picturesque Cheshire venue.

“It was a monumental day for everybody and I have to thank all involved,” he concluded. “We’re back in town. I haven’t won a race yet but I was pretty close to doing so. We took three podiums in a day, so I’m happy with that.”

As mentioned above, however, it’s Sam Tordoff who is currently top dog in the BTCC and the Yorkshireman will have his own backing at Croft. Young rookie Daniel Lloyd, who qualified on the front row at Oulton Park, is another local lad looking for success next weekend.

So it’s undoubtedly a momentous time for the area in British motor sport – not only is the north east looking forward to welcoming the UK’s best motor racing series to its Croft circuit, but the region also boats some of the championship’s biggest stars.

Timetable and tickets
All three BTCC races on Sunday, 19 June – and many of the day’s other races – will be broadcast live and in high-definition on ITV4. Those in attendance at the circuit can stay in touch with the commentary and live timing from every session, available on the btcc.net Live Zone throughout the weekend.

The support series on the TOCA package are also guaranteed to thrill with a double digit total of races set to entertain the crowds. The Porsche Carrera Cup GB, Renault UK Clio Cup, F4 British Championship and two Ginetta series’ will all be in attendance in North Yorkshire, making for a jam-packed weekend of truly unmissable racing.

Tickets can be purchased on the gate at £14 on Saturday and £28 on Sunday, or £36 for the full weekend. Accompanied children aged 15 and under are admitted free. For further information see www.croftcircuit.co.uk or call 01325 721815.