Abbott bidding to build on Oulton promise at Croft 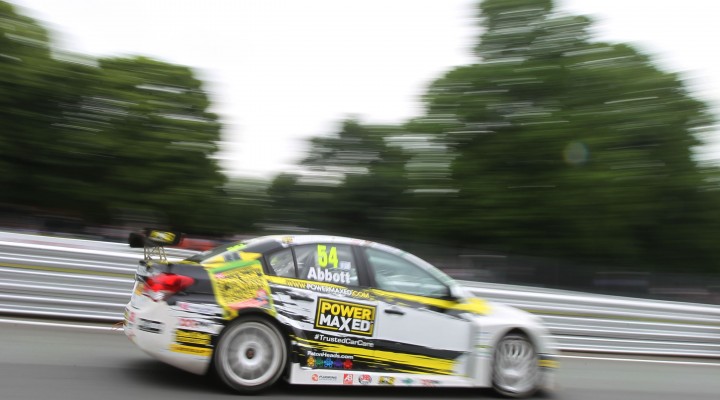 Hunter Abbott is keen to confirm the progress he and Power Maxed Racing made at Oulton Park last time out in the Dunlop MSA British Touring Car Championship, as he targets a solid points haul at Croft this weekend (18/19 June).

Having switched from a rear-wheel drive Audi A4 to the front-wheel drive Chevrolet Cruze this year, Abbott has spent the first few race meetings finding his feet in his new surroundings, but a breakthrough weekend at Oulton a fortnight ago saw the 35-year-old narrowly miss the top ten in qualifying – lining up a season-best 11th – and then bag a brace of points-scoring finishes.

Along the way, he lapped fifth-fastest in race one – topping the timing screens through the first sector – and third-quickest in race two, the best of the Independent runners and even outpacing race-winner Sam Tordoff. Abbott’s #54 car will sport the logo of new team sponsor CCTVKits.co.uk at Croft, and its driver is keen to consolidate his and PMR’s improving form.

“Over the last couple of meetings, my understanding of front-wheel drive has started to click and that has shown in our pace,” he reflected. “At Thruxton, we were third-quickest in race two, whilst at Oulton we topped the sector times at points throughout the weekend and were the second-fastest front-wheel drive car in race two. The results were solid if not quite as good as our pace, but everything is moving in the right direction.

“I like Croft and I’ve had good results here before touring cars. It’s a great circuit with some really ballsy corners which – mixed with the technicalities of the Complex – produces some brilliant racing. Tyre wear and performance drop-off is always an issue and I’m looking forward to learning more about managing the Dunlops in a front-wheel drive car, which uses its tyres more aggressively than the RWD format I’m used to. That will be the key to our results this weekend.”