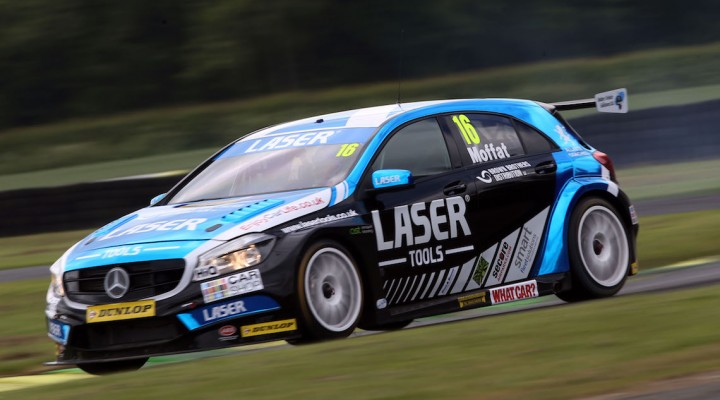 Andrew Jordan, Colin Turkington, Aron Smith and Tom Ingram filled the places at the top of the timesheets in the opening 20 minutes of running, highlighting the potential in Ford, Subaru, VW and Toyota’s respective machinery.

It wasn’t long before BMW joined the party, however, as championship leader Sam Tordoff blasted into second. Croft has been a happy hunting ground for West Surrey Racing’s fleet of BMWs over the last few years, and Tordoff’s effort in the ballast-laden Team JCT600 with GardX 125i M Sport again proved the rear-wheel drive car’s value at the North Yorkshire venue.

A number of changes took place in the closing moments and it was the impressive Scotsman Moffat who claimed top spot with a 1:25.038s lap time, while the #77 car of Jordan held off Tordoff by just 0.077s to take second.

“It’s nice to put Oulton Park behind us and show that we’re in the ball park here straight out of the box,” said Moffat. “It’s very early days of course so we’re not getting carried away, but we’ve made a lot of changes to the car and it’s always good to immediately feel the improvements.”

Ingram was fourth while WIX Racing’s Adam Morgan moved into fifth, rounding off an encouraging start to the weekend for the two Ciceley-run Mercedes’.

“Seeing Adam up in fifth is also encouraging,” continued Aiden. “When one of you goes quickly you’re never quite sure, but both of us being up there hopefully means that we’ve collectively found something in the car. I haven’t spoken to him yet but we’ll look at the data as I’m sure there’s more time to find.”

Turkington held on to sixth with Gordon Shedden next up in the first of the Hondas. Smith could only manage eighth at the finish in his BKR VW, whilst Eurotech duo – Martin Depper and Daniel Lloyd – completed the top ten order.

All 32-cars took part in the session, although the Team HARD-run Toyota of Chris Smiley stopped out on track and had to be retrieved after the chequered flag fell.

Free practice two takes place at midday, which you can keep in touch with via the BTCC’s Live Zone and social media accounts. Qualifying commences at 16:00, with the entire session being streamed live via www.itv.com/btcc.