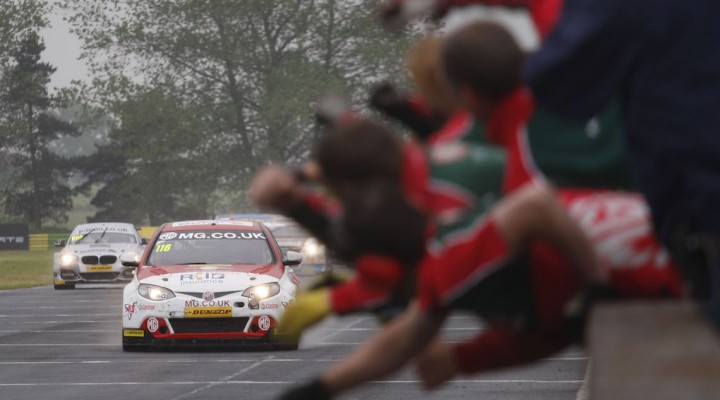 MG Racing RCIB Insurance driver Ashley Sutton stormed to his first ever Dunlop MSA British Touring Car Championship victory after producing an outstanding performance in the final encounter at Croft. The young rookie’s success means that the BTCC boasts ten different race winners from the opening 15 races of the 2016 season.

The first wet race since Brands Hatch in 2014 – some 44 races ago – left teams scrambling for Dunlop Blu Response wet tyres prior to the start, although the likes of Gordon Shedden and Mat Jackson gambled unsuccessfully on slicks.

Pole-sitter Sam Tordoff held station from Tom Ingram and Jack Goff in the early running, with Sutton trailing Colin Turkington’s Subaru in fifth as the rain lashed down at the North Yorkshire venue.

Despite an early safety car intervention the action resumed in emphatic style as Turkington flung his car around the outside of Goff’s BMW at Tower, with Sutton’s MG following suit at the next turn.

The wet conditions created some dramatic scenes with the MG duo of Sutton and Josh Cook in particular sliding their cars sideways through the Esses.

Sutton clipped Turkinton’s Subaru at the Hairpin on lap nine to move into third, with Rob Collard also nipping by his former WSR team-mate.

One tour later and Sutton was past Ingram on the approach to the Esses and he immediately set about hunting down race leader Tordoff. He was further aided by a late safety car period, which gave Sutton two laps to make a move on the Team JCT600 with GardX BMW, and that’s exactly what he did on the penultimate tour.

Clearly carrying much more speed and control than the rear-wheel drive BMW in wet conditions, Sutton blasted by Tordoff at Sunny and never looked back as he claimed a famous first win.

“I’m over the moon,” said Sutton. “I knew we had the pace but I didn’t have very long to get the move done. I had to go for it and I’m delighted I did!”

Tordoff had to make do with second, extending his championship lead in the process, while Ingram completed the podium positions.

Collard continued his scrap with Turkington until the finish, with the latter being further demoted after a final corner nudge from Cook’s MG. That allowed Andrew Jordan’s Pirtek Ford to also nip by, eventually leaving Silverline Subaru BMR Racing’s Turkington down in seventh.

Aron Smith took a hard earned eighth, ahead of the fading Goff, whilst Jason Plato completed a low key drive in tenth.