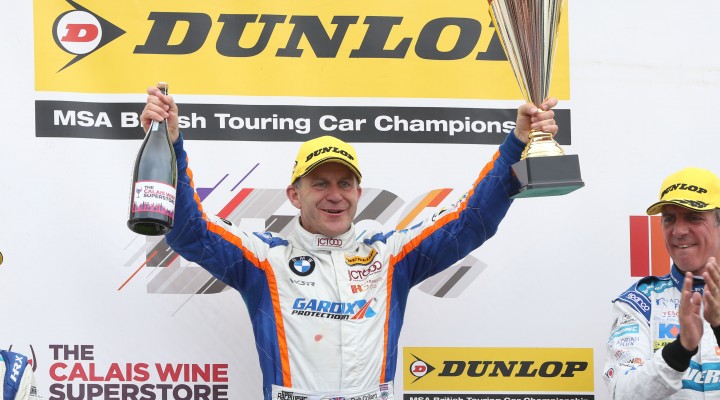 It was the duel between Turkington and Plato that provided the main storyline throughout the race, which initially seemed to favour the latter. Plato made a brilliant start and was able to sail around the outside of his team-mate into turn one.

Turkington hounded his Silverline Subaru BMR Racing stablemate during the early laps and regained the lead at Tower on lap four, but the battle was far from over. Plato tagged Turkington’s Levorg into the same corner at mid-distance, sending both cars sliding wide, as the West Surrey Racing duo of Jack Goff and Rob Collard looked on.

Team IHG Rewards Club’s Goff hesitated in the melee but Collard needed no second invitation as he blasted his Team JCT600 with GardX machine from fourth to first in the blink of an eye. As the Subarus straightened out it was Plato lying in second with Turkington now demoted to third.

The incident seemed to stunt the pace and progress of both Subarus, leaving the top four places unchanged until the finish, handing Collard a well deserved victory and the 50th podium in his BTCC career. Plato and Turkington completed the rostrum positions, with Goff taking a hard earned fourth.

“If in doubt, flat out!” said Collard, when describing his move for the lead. “I was boxed in behind Jack Goff but then the two Subarus touched and a gap appeared. It was an extremely small gap but it was just big enough to get into, and thankfully Jason gave me room. It’s a great result for the whole team and really good for our championship.”

The scrap behind was several seconds adrift as Ashley Sutton produced his second mature and consistent performance of the day. The ultimate pace in the MG6 doesn’t quite seem to be there in race conditions at Croft, which has forced Sutton to defend in valiant fashion. He held on admirably yet again, as he did in race one, to take fifth ahead of Motorbase Performance’s Mat Jackson.

Tom Ingram held Sam Tordoff at bay to secure seventh, but the latter had reason to cheer after the race. The championship leader worked hard over the closing laps to pull identical moves on Matt Neal and Andrew Jordan on the exit of the Hairpin, and his reward was a reverse grid pole position for race three. Jordan and Neal completed the top ten order.

Tordoff now leads the standings from Neal by two points, whilst Collard’s win moves him to within seven points of the championship summit. Race three takes place at 5pm with every minute being screened live on ITV4.