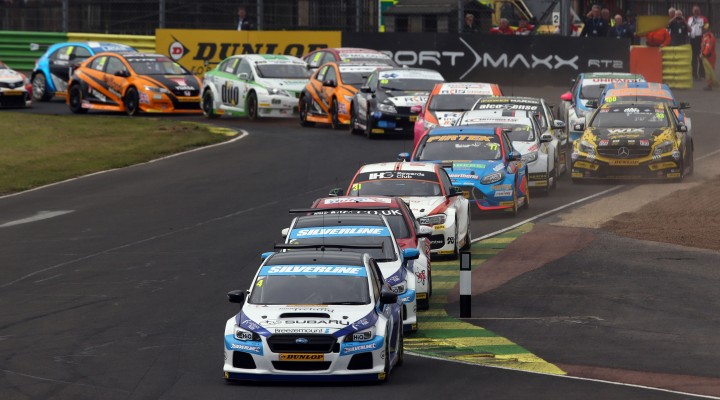 Colin Turkington led home team-mate Jason Plato in the BTCC opener at Croft to score the first ever one-two finish for Silverline Subaru BMR Racing. It was a podium of firsts as Ashley Sutton took his maiden rostrum for MG Racing RCIB Insurance.

Turkington was in command for the duration although he had to contend with the attentions of Plato, plus three safety car interruptions and an early attack from fellow front-row starter Daniel Lloyd.

Lloyd’s Eurotech Honda made a great getaway off the line, which left him on the outside of Turkington going into turn one. The young BTCC rookie turned in to early, however, and inevitable contact followed. The Civic Type R was fired off into the gravel and out of the race, whilst Sam Tordoff’s BMW also fell down the order with his own off-track excursion.

“That’s the highs and lows of motorsport,” said Lloyd. “I’m kicking myself as I wasn’t expecting to get off the line so well. It was the best start I’ve ever had but it forced me to take the outside line. It’s horrible out there as you have two options; go for it or stay wide and then let everyone fly past down your inside. In hindsight I should have taken the latter choice. It was just one of those things.”

Championship leader Tordoff was able to fight his way back up the order although the lap one incident would eventually catch up with him. An oil leak – caused by his early trip through the gravel – forced him out of top-level contention, although he scored minor points to remain at the top of the table alongside Matt Neal.

Hunter Abbott’s top ten challenge didn’t last long unfortunately after his slid wide and collected Adam Morgan’s Mercedes on the opening lap. Abbott’s Power Maxed Racing Chevrolet retired on the spot while the WIX Racing Mercedes endured more contact later in the contest – a hit from behind by Mat Jackson’s Ford, after he had received his own nudge, ultimately ended Morgan’s race.

An off for Mark Howard’s VW and retirement for the Laser Tools Racing Mercedes of Aiden Moffat were two further reasons for safety car interventions, which leader Turkington dealt with in his stride.

Plato kept him honest, after getting his own stellar start, but the Ulsterman held him off at arms length to take his second victory of the season.

“They certainly didn’t make that one easy for me,” said Turkington. “It was the kind of race where you need to remain 100 per cent focused right to the end. To have three safety car periods is quite unusual, and with the tyre pressures dropping at the lower speeds, I had to carefully manage all the re-starts which was tricky. With Jason not far behind either, there was absolutely no margin for error, but the team gave us both a fantastic car so massive credit to them all.

“The Subaru Levorg package is getting stronger and we’re not a million miles away with it now. Of course, I’ll have an extra 75kg on-board in race two – which is effectively another me plus all my shopping – so that will obviously take some speed off, but the chassis is working really well so we should still be in good shape.”

Sutton produced arguably the defensive drive of his career as Jack Goff’s Team IHG Rewards Club BMW searched for a way past for the entire 18-lap battle. Goff looked to have secured the deal on a number of occasions but Sutton would not be denied his first BTCC podium.

“That’s a great result,” beamed Sutton. “It was really hard out there. I was expecting to get squeezed out at turn one, but we hung on and I knew the Subarus would be off into the distance after that. It was then all about keeping Jack behind me while looking after the car and tyres – I am delighted and it’s a great result for the team.”

Andrew Jordan’s Ford was fifth with arguably ‘driver of the race’ Jake Hill close behind. The Team HARD-run Toyota did not look out of place fighting in more illustrious company and Hill remained on the attack throughout. Eventually he had to settle for an impressive sixth, his best ever finish in the BTCC.

Rob Collard made steady progress up the order from 13th on the grid to take seventh, becoming the highest finisher of the hard-shod tyre cars, whilst Jackson’s Ford rallied to a hard fought eighth. Tom Ingram and Aron Smith completed the top ten order.