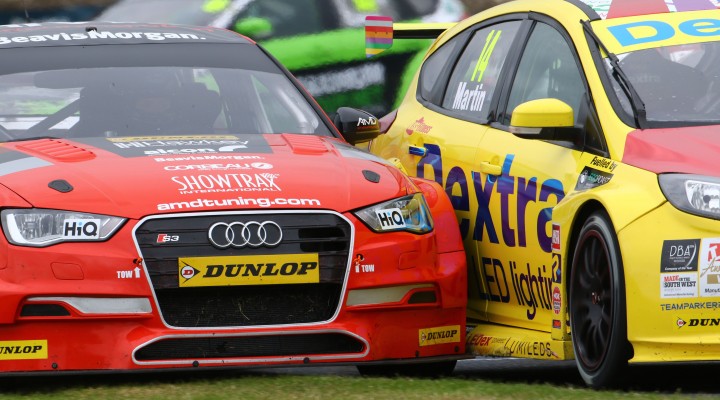 The West Thurrock-based team made the long trip to North Yorkshire keen to build on the pace displayed by its Audi S3 at Oulton Park two weeks earlier, where an unfortunate clash on-track was all that prevented driver Ollie Jackson from scoring in race three.

Free practice saw Ollie lapping just a second off the pace and he would secure 22nd place on the grid for race one after a tightly fought qualifying session.

Electing to run Dunlop’s hard compound tyre at the first opportunity, Ollie fought his way into the top 20 by the finish and then raced strongly in the midfield in race two; battling his way up the order to take the finish in 15th place and secure a well-earned point.

The arrival of rain in the run-up to race three left teams in a quandary over which way to go with their tyres, with the team electing to stay on slicks in the hope that the shower would pass.

Unfortunately, worsening conditions left Ollie with little option but to pit to change tyres, dropping him off the lead lap and resulting in a 26th place finish.

Despite the final result, Ollie declared himself pleased with the weekend as a whole.

“Overall, I think that was the best race day we have had so far this season,” he said. “We made a transformational change to the car overnight, which I’m delighted about as it transformed how it performed on track and I think that will benefit us for the remainder of the season.

“To score a points finish this weekend, having raced our way into the top 15, was really pleasing and I think it was certainly worth us taking the gamble in race three as the end result would have been spectacular if it had gone our way. I’ve never been frightened of racing a car in damp conditions on slick tyres and we are only racing for individual results rather than a championship, so we took the decision to go for it.

“Unfortunately the weather took a turn for the worse but at least we gave it a go. Despite that, it was a good way to go into the summer break and I can’t wait for Snetterton.”

Team boss Shaun Hollamby was also happy with the progress made by his AmD squad.

“We wanted to pick up a points finish this weekend going into the break, so it’s great that we managed to achieve our aim,” he said. “This is a circuit where the racing is always close and we knew it wouldn’t be easy, but Ollie produced his best drive of the season in race two and he was rewarded for it.

“To score points in this championship is one thing, but to score them on merit in that way is particularly pleasing and its unfortunate that we made the wrong call on tyres for the final race. Had the rain eased off as we thought it was going to, there is no doubt we’d have been on for a fantastic result but sadly it didn’t go our way.

“However, this weekend has seen us make more progress and I think we’re in good shape for the second half of the year.”