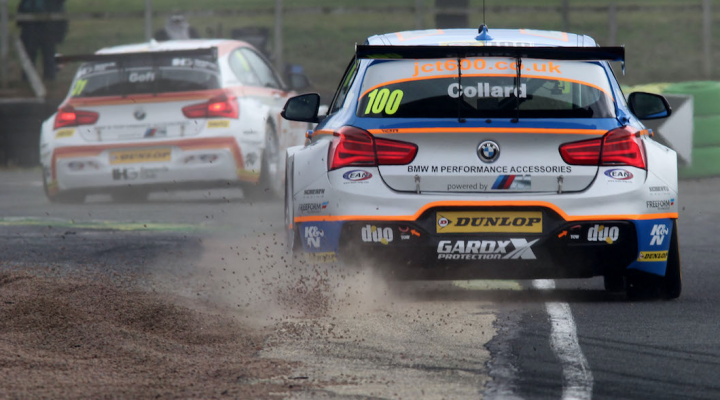 The Hampshireman is hopeful of keeping right in the championship mix by maximising a weekend in Norfolk that may not necessarily suit the rear-wheel drive BMW 125i M Sport, at a circuit that has not been the kindest to Collard in the past.

“Snetterton’s not one of my favourite circuits if I’m honest, It’s been a little bit of a bogey track for me,” said Collard. “The hope is that we qualify reasonably well but it’ll be difficult for us to be honest to have the one-lap pace that the front-wheel drive cars showed in the test – we were down in 16th and 18th on the Thursday.

“I just want to get through Snetterton with a nice bag of points and three strong finishes – that’s all I ask for, then hopefully it’ll be glory days heading to Knockhill.

“The 2016 BTCC is so competitive, so to be able to have won races and to have had podiums and be second in the championship in such a competitive year, it’s fantastic. It’s my highest ever placing at this stage in the season and we have to take the positives from that. It’s taken a long time to climb to that level.

“We had a few issues with things out of my control and some contact where we lost 25-30 points at Oulton Park for example. We’ve got to make sure nothing like that happens at Snetterton then we’re onto the tracks where I feel really strong – Knockhill, Silverstone, Brands Hatch GP. I feel we go strong there and I’m really looking forward to them.

“I think it’ll be difficult to get podiums at Snetterton just because of where we have to qualify, with weight on. Hopefully we may get lucky in race three. A batch of top-six finishes would, for me, be ideal. If I can do that in all three races I’ll be well placed. If I can come away from Norfolk  in the top three then I’ll be happy.”

Testing at Snetterton was positive for WSR, with plenty of ground covered by Collard, Tordoff and Jack Goff. The former was largely involved with development work throughout the early portion of testing, but did get licence to run on his own accord later on – leaving him pleased with what he saw from the car in the circumstances.

“It was quite a tiring couple of days, I must admit,” said Collard. “We had a good mixture of different conditions with the wet weather on the Wednesday. As much as we didn’t anticipate too much rain, we were able to try different things on the car, It was hard to tell exactly what worked as all three cars were running differently, all trying different things. I was predominantly acting as the development car, working on some aero, so not necessarily going for the fastest time but trying to be consistent.

“We had more of a free reign on Thursday afternoon. The car feels good. We’re carrying some weight for Snetterton so we’re not at the top of the timesheets, however, I feel the car is very raceable. We’ve not been looking for a one lap time; we’ve been looking for all three cars to be able to do a bit of durability running and it was very encouraging overall.

“Some of the things we did at Thruxton went from massive swings from one area to another to find what did and didn’t work. It’s very surprising actually but it’s impressive how the car reacted to changes. We have a lot of data-crunching to do now.

“The engineers are going to be flat out in the lead up to the race here collating all the information from the three cars. We’ll arrive there in good shape.”