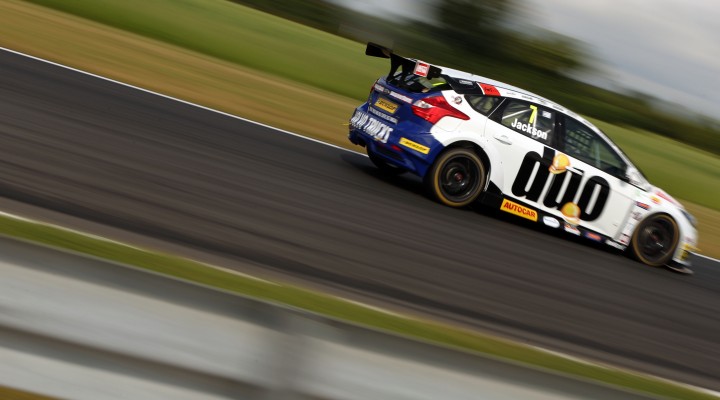 Gordon Shedden said: “Pole position! I didn’t expect it but I’m delighted. I can think of worse places to start. It’s only one point for today though and we desperately need a big points haul tomorrow. It’s been a bit random today. We hardly passed go and collected 200 quid in practice but we got everything together for qualifying. We didn’t have time to change things around much but maybe ‘out of the box’ is the best way. It was a really really good lap and it all came together – it was absolutely fantastic.”

Colin Turkington said: “I would have taken P2. On the whole I’m happy to be starting on the front row. It was the first time we’d put the car on new rubber. The balance wasn’t quite where I wanted it to be so it feels like we could improve. I got the most out of the car in its current state but hopefully we can nudge it even further in the right direction. We know where the issues are and we understand where we’re limited. Having not done a huge amount of testing, it’s difficult to know the exact changes to make. We’ll do our homework tonight, work hard and try to get it right tomorrow.”

Adam Morgan said: “I’m ecstatic with that to be honest. It’s my best ever result in qualifying. Having struggled in the past few weekends it’s now time to get back up to the sharp end and we’ve given ourselves every opportunity by starting P3 for race one. The car’s been absolutely mega all day. That two-day tyre test at Snetterton was brilliant. We think we found something with the car and we were able to push harder and harder all day. We were so close to pole, too. I’m going to try and stay out of trouble tomorrow and bring it back with three strong results. I’d love to get back on the podium again and a win would be fantastic, but I’m thinking about the championship overall so points are the important thing.”

Tom Ingram said: “We’re really happy with P4. We are ahead of the guys we’re competing against in the championship, and those in front of us are all carrying less ballast. We’re already in a strong position going into tomorrow and we’re going to try and hold station. Maybe we can pick up a podium, I don’t know but we should be in good shape. It’s going to be the same for us as every weekend, aiming for points so we’ll take what we can get.”

Mat Jackson said: “We’re towards the front of the grid and it could be a lot worse. If we can make a couple of places off the line and maybe make the podium then we’ll be happy. There’s always a little bit more. It was the first run and the circuit appeared to drop off thereafter but what’s done is done. P5 is still a good place to start tomorrow and hopefully we can go forward. It’s very close, there’s not a lot of time in it. Hopefully we can hook up the start and muscle our way through. We need points after the disaster at Croft and hopefully we can put that right.”