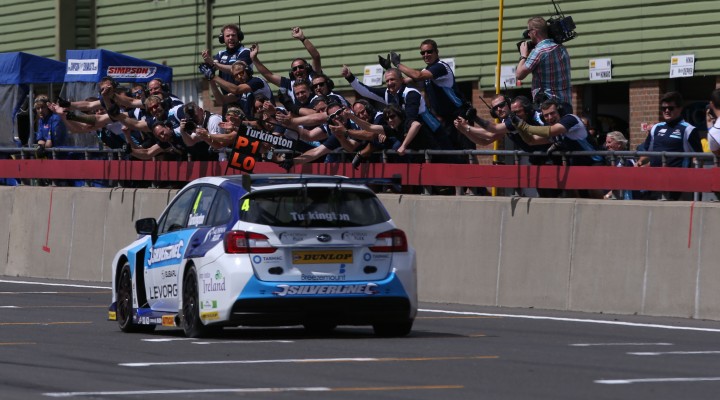 Colin Turkington eventually got the better of pole-sitter Gordon Shedden to win race one of the Dunlop MSA British Touring Car Championship at Snetterton.

A near race long duel commenced off the line as Shedden’s Honda Civic Type R brilliantly fended off the rear-wheel drive Subaru Levorg into Riches for the first time.

It was bumper-to-bumper stuff for the first half of the contest but Turkington finally muscled his way past after a good run through Palmer’s corner on lap eight of 12. Shedden couldn’t respond and Turkington went on to become the first three-time race winner of 2016.

Mat Jackson made the best start of the leading contenders as he blasted his Motorbase Performance Ford Focus from fifth on the grid to third off the line. While Jackson kept the lead duo honest, throughout, he also had to keep the squabbling Adam Morgan and Ashley Sutton behind. Jackson did the job, claiming a podium on the team’s 300th BTCC race.

Morgan’s Mercedes swapped places with Sutton’s MG on a number of occasions but the tussle was ended prematurely when the latter’s Triple Eight car endured a puncture.

Sutton’s pain was Jason Plato’s gain as he nipped by Tom Ingram’s Toyota to turn seventh into fifth in the blink of an eye.

The ballast-laden cars for title chargers Sam Tordoff and Matt Neal raced well to claim seventh and eighth respectively, whilst Warren Scott and James Cole were next up – impressively making it four Subarus in the top ten for the first time ever.

Andrew Jordan and Hunter Abbott deserve credit for fightback drives through the order – both scoring points after off-track excursions. Power Maxed Racing’s Abbott also claimed the fastest lap and a one point bonus in the process.

Colin Turkington said: “That was one of my most memorable races. I’ve never won around here in a rear-wheel drive car so it’s great. My pace was much better than I expected, I just tried to be patient and I made the move when the opportunity came up. I was in two minds; do I let him go on up the road a bit and take the pressure off myself from the Ford behind? Then, I thought no… I’ll hammer Gordon (Shedden) while I can. He went in deep and I forced my way through on the switchback. I won’t give up on the championship until it’s mathematically impossible. If we can keep the momentum going then there’s every chance.”

Gordon Shedden said: “I had to be very defensive in a lot of places. He used the strengths of the car on the overlap at the hairpin and made his way through. I was going as slow as possible while trying to stay in the lead! Second place was good but obviously a win would have been better. It’s great, though. I’ve not been on the podium for six races or something. It was one of those enjoyable ones where it was a proper dice between myself, Mat (Jackson) and Colin (Turkington).”

Mat Jackson said: “We came into the race hoping we could get onto the podium after qualifying, and to deliver that it’s good. It’s points for the championship and for our 300th race – it’s a great result. It’ll give us a good start for race two. We got punted in the rear and it did rub against the tyre there at the start but it sorted itself out.”