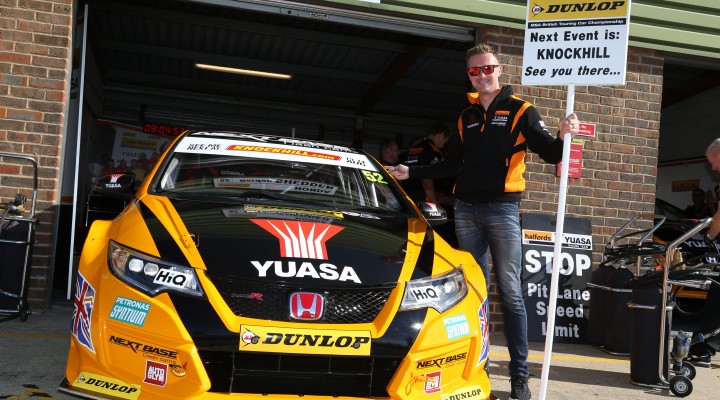 Reigning champion Shedden re-ignited his title defence with a recent victory at Snetterton – much to the delight of his loyal fans that will be flocking to Fife next time out – but the Honda man remains just one of around a dozen championship contenders as this incredible BTCC season continues to reach new heights.

“I couldn’t be happier,” said Shedden. “Snetterton has put me back in contention and I will be heading to my home event at Knockhill on a real high!

“I can’t wait for the weekend. The circuit is amazing and you really have to hang on there. It’s a proper touring car track and I’m sure the racing will be fierce – let’s hope for a Scottish win, or two, or three!”

Talented Aiden Moffat – the youngest driver in the history of the BTCC – is another local light with a big future ahead of him. A maiden podium at Knockhill last season signalled his arrival in Britain’s biggest motor racing series, with many marking his championship credentials in the years to come.

The short, undulating and atmospheric Knockhill circuit will provide a rollercoaster ride for the huge touring car grid and will undoubtedly play host to three unforgettable tin-top battles, although the final destiny of the country’s most coveted motor sport prize looks set to go down to the wire.

Story so far: Unpredictable, unprecedented and unmissable
The 2016 Dunlop MSA British Touring Car Championship boasts ten different race winners so far – an unprecedented number at this stage of the campaign – leaving pundits still searching for a favourite for the title.

Matt Neal and Gordon Shedden were first and second in the standings following the opening two events, suggesting that Halfords Yuasa Racing would be the team to beat for the season to come.

Then it was the turn for Team JCT600 with GardX to hit the top as team-mates Rob Collard and Sam Tordoff swapped places at the summit. Collard now leads his younger WSR BMW colleague by just three points, with the Honda duo heading the chasing pack.

Shedden’s fortunes dipped at Croft where a disastrous event left him languishing down in ninth place, but he bounced back like a true champion with a win at Snetterton – he now sits fourth behind his Honda Civic Type R stablemate Neal.

2014 supremo Colin Turkington similarly claimed a victory at the Norfolk track earlier this month, as one of the year’s most incredible stories continues to unfold. Subaru has entered the BTCC for the very first time in 2016, with the overall focus on developing its Levorg model for a championship challenge over the coming seasons. The Silverline Subaru BMR Racing team found race-winning pace quicker than expected, however, and now Ulsterman Turkington is forging an unlikely assault on the title after a hat-trick of wins so far.

Mat Jackson is the only other driver to reach the top step of the rostrum on three occasions, and the Motorbase Performance driver is very much a leading contender as he bids to end his championship drought.

No fewer than seven other drivers can consider themselves very much in the title race, but with events now coming thick and fast they will have to make their move sooner rather than later.

Talking point: 500 not out for Jason Plato
Jason Plato is the most successful driver in BTCC history, having amassed 94 victories in his glittering career to date, and the tin-top legend will reach another notable milestone at Knockhill next weekend.

The opening race on Sunday will be his 500th in Britain’s toughest championship, with a record of nearly one win in every five races ensuring an outstanding and long-lasting legacy in the series.

“I’m sure it’s something I’ll look back on fondly at the end of my career, but for now I’m focussed on the job at hand,” he said. “I’m more interested in the number of wins I’ve had than the number of races, to be honest.”

Winning also remains a big talking point this season, as Plato still searches for his maiden success with Silverline Subaru BMR Racing, although it’s more paddock chat rather than something the man himself is too concerned about.

Plato is signed to a multi-year deal with the Japanese marque and is playing the long game, whilst acclimatising himself to rear-wheel-drive machinery for the first time in his BTCC career.

“I feel like it’s close, but we’re not losing too much sleep over it,” commented Plato at Snetterton. “Things just haven’t quite gone my way so far this year.”

With a career spanning nearly two decades, the ups and downs of motor sport are merely part of the job, but it’s fair to say his 500 races have provided some of the best and most memorable performances ever seen in the BTCC.

The good times have outweighed the bad by quite some margin, and you wouldn’t put it past him adding to his victory tally at Knockhill next weekend.

Timetable and Tickets
Three BTCC races will take place on Sunday, with the entire day broadcast live and in high definition on ITV4.

In addition to the BTCC, there will be a number of races on the support bill, including popular sportscar, single-seater and tin-top contests. A total of 14 races will take place across the weekend.

Tickets are still available for the champion’s homecoming at Scotland’s Knockhill circuit (13/14 August), the BTCC’s only venture north of the border. Prices start at just £37 for adult weekend tickets, with discounts available for family bookings and children under 12 able to enter free of charge. For more information and to order tickets, head to www.knockhill.co.uk or call 01383 723337.